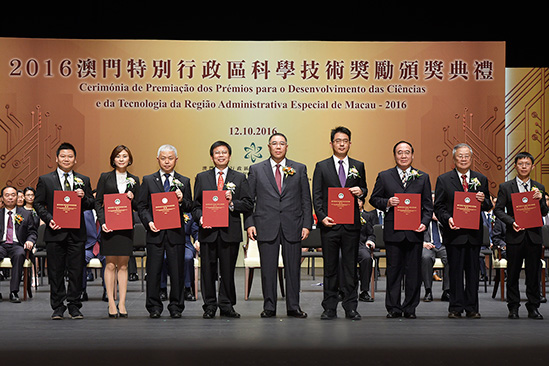 The Ceremony for Presentation of the 2016 Macao Science and Technology Awards was held in the Grand Auditorium of the Macao Cultural Center at 4 pm on October 12, 2016. Eight research projects of M.U.S.T. won prizes at the Awards; in particular, the University won the only two first prizes of this year’s Awards; it takes place biennially. This is the third time the Awards gives out awards and has altogether produced three first prizes over the three times; Macau University of Science and Technology has won two of the three first prizes; they are the first prizes of the Natural Sciences Awards respectively in the field of Traditional Chinese Medicine and the field of Space Science; winning such prominent awards marks that, with respect to quality standards and research outputs in the above-addressed areas, M.U.S.T. is now in line with the leading research teams of the relevant fields.

President of M.U.S.T., Chair Prof. Liu Liang gave warm congratulations to the award-winning scholars, noting that winning the awards means acknowledgement and encouragement by the Macao S.A.R. Government and the Macao society for M.U.S.T.’s proactive engagements in science research and technology innovations; however, such awards only represent the past, and what we need to better attend to is the future; we need to have a better planning of the future, lay our eyes on the future, respond closely to the demands of the Macau society in its course of realizing adequate diversification of its economy, align ourselves with the frontier of world science and technology, fully seize three key factors: “innovation, multi-disciplinary integration, and collaboration” when engaging in scientific research and providing technological services, and jointly lift the quality of science research and industrial development of M.U.S.T. to a greater height.