Home >> MUST News >> Pearls in Paradise: Exhibition of Precious Maps and Archives from Vatican Apostolic Library is held in MUST
2015-07-29 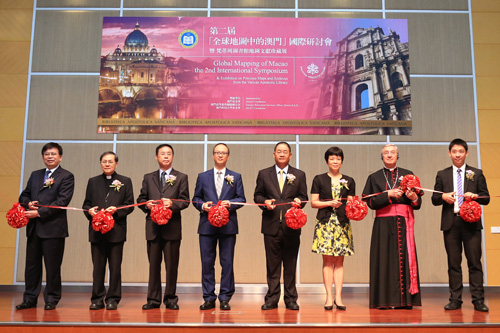 Jointly organized by Macau University of Science and Technology and the Vatican Apostolic Library, Pearls in Paradise: Exhibition of Precious Maps and Archives from Vatican Apostolic Library and the 2nd International Symposium on Global Mapping of Macau was successfully held at N101, the Library Building of MUST on July 29th. Dr. Zhiliang Wu, President of the Board of Directors of Macau Foundation, Mr. ChioFai Sou, Director of Tertiary Education Services Office, Ms. Ting Xu, Director of Dept. of Culture and Education Office of the Central People’s Government in the Macau S. A. R., Mr. Zhenhua Li, Director-general of Dept. of General Affairs Office of the Commissioner of the Ministry of Foreign Affairs of the People’s Republic of China in the Macau S. A. R., His Excellency Most Reverend, Msgr. Jean-Louis Brugues, the Archivist and Librarian of the Holy Roman Church, Dom José Hung-seng Lai, Roman Catholic Bishop, Diocese of Macau, Mr. Iat Hang Yong, Division Head of Research and Education Reform, the Education and Youth Affairs Bureau (DSEJ) of Macau, Chair Prof. Liang Liu, President of Macau University of Science and Technology, attended the opening ceremony and cut the ribbon. The event was sponsored by the Macau Foundation, Tertiary Education Services Office of Macau and MUST Foundation.

Vatican Apostolic Library has elaborately selected approximately 100 antique maps and manuscripts from its amazing collection of millions of items the exhibition. It is the first time for the treasures from Vatican Apostolic Library, the oldest library in Europe, to be displayed for all to see not only in the Macau but also in the Cross-Strait four regions. The exhibition features maps created between the 12th and 19th century, mainly including “Ribero’s World Map” drawn by Portuguese cartographer Diego Ribero in 1529 and generally considered one of the most outstanding world maps in the Age of Discovery; the “Complete Geographical Map of all the Kingdoms of the World” created by Matteo Ricci in 1602, one of the only six copies of the original woodblock print, and one preserved in the best condition; the“General Star Map of the Northern and Southern Hemispheres Divided by the Equator” made by Johann Adam Schall von Bell in 1634 and known as the earliest and largest star map in Chinese (incorporating the South Pole), 5 meters long, with vivid colors; and the “Route Map from Middle East to China and Northern Asia” drawn by Athanasius Kircher in 1667, revealing the historical “One Belt and One Road”, with Macau located at the starting point of the “maritime Silk Road”.

The 2nd International Symposium on Global Mapping of Macau was held at N101, MUST Library Building on July 29th and 30th, sharing the same theme as the exhibition. Scholars and experts on the history of Chinese-Western cultural exchanges, antique maps and literature were invited to share insights and discuss collaboration opportunities on topics such as (1) Ancient China’s knowledge of itself, other countries, and the universe; (2) the Ancient West’s imagination and exploration of the East; (3) the dissemination of Western Learning to the East compared with the introduction of Eastern Learning to the West; (4) early missionaries to China and to Macau in particular; (5) the Chinese Rites Controversy and Macau; (6) other relevant topics. After the keynote speeches on the first day of the symposium, there was a 40-minute-long scholarly dialogue – “Amazed by the over-500-year-old Guia Hill and Penha Hill, scholars gather again in Macau studying maps of the past for a new blueprint for the future”, moderated by Prof. Chengdan Qian, and participated in by Dr. Zhiliang Wu, Msgr. Jean-Louis Brugues, Prof. Yilin Zou, Ms. Clara, Dong Yu, and Prof. Yingyan Gong. With exchanges between scholars from Vatican City, Mainland China and Macau, the discussion was exciting and fruitful. 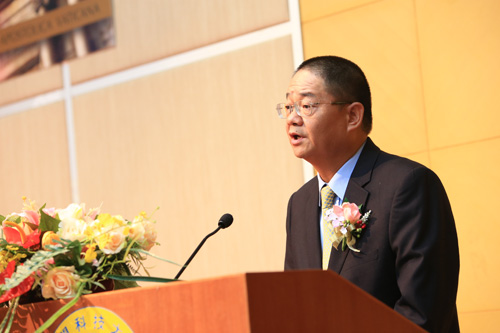 In the opening remarks, Dr. Zhiliang Wu said that the role of Macau in the Eastern-Western cultural exchanges and its historical legacy was the most valuable treasure we had. These historical and cultural resources require more people to explore systematically and deeply from different perspectives and different realms. Although there are innumerable great achievements of historical research on Macau, such as sorting out the historical data and publishing relevant outcomes, the collection of visual material has lagged behind, which has raised concern in recent years. MUST makes great effort to collect, catalog and publish the scattered old maps of Macau from archives and libraries around the world. It is significant not only to the academia but also to Macau. It is hoped that MUST can keep working on projects like this and harvesting fruitful results. He pointed out that due to MUST’s effort, this was another breakthrough in the project of Global Mapping of Macau. With the same high standard of academic qualification as the 1st symposium, the 2nd one was held together with the Vatican Apostolic Library, which demonstrates the role of Macau as the bridge of the Chinese-Western cultural exchanges and communication for almost 500 years, and predicts a boom in the new age. 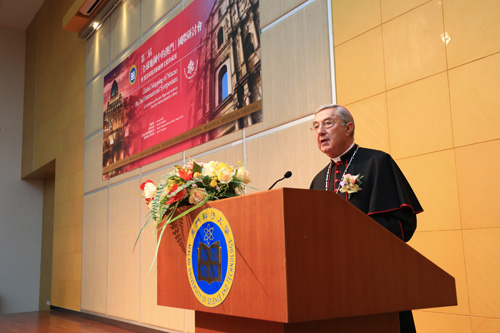 His Excellency Most Reverend, Msgr. Jean-Louis Brugues from Vatican City introduced the history and collections of the Vatican Apostolic Library and the exhibits on display. He said that it had been 500 years since Portuguese settlement in Macau in the middle of the 16th century up to the present, during which Macau had played an important part in the East-West exchanges. This exhibition is the first cooperation between the Vatican Apostolic Library and MUST. He expressed the hope that Macau would remain the centre of Chinese-Western exchanges, and the bridge of Eastern-Western communication. He also sent good wishes for the public to enjoy this exhibition. 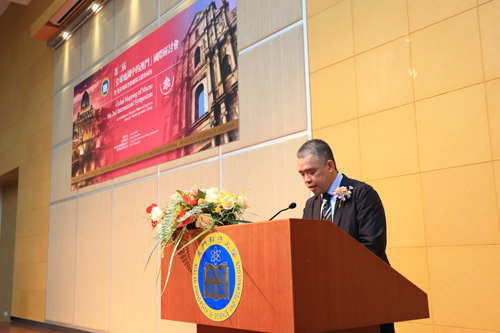 On behalf of MUST, Dr. Tong Ka Lok, Vice-President of MUST, delivered a speech. He said that the Library of MUST provided service to not only the teaching and research in the university, but also to the public in Macau. It has dedicated itself to sharing resources and cooperation with libraries from the Cross-Strait four regions and other countries. This exhibition and symposium are part of the 2nd phase of the project “Study of Historical Maps Related to Macau”, which belongs to the grand research project “Global History and Macau” hosted by the Institute for Social and Cultural Research of MUST. The project is sponsored by the Macau Foundation, planned and carried out by the Library of MUST. It is estimated that in several years, based on the theory of global history, they will collect the Chinese or western antique maps that are related to Macau during the 16th and 19th century from important countries and regions. These maps will be copied with high precision, cataloged, studied and published. Up to the present, 1,500 maps have been collected, one third of which have been copied with high precision in the original sizes. The database “Global Mapping of Macau” has been developed for the public. Now the data production is now in progress. It will be accessed by the public soon.

As the library exclusively for the pope, the Vatican Apostolic Library has the most valuable spiritual wealth and cultural treasure in human history. Rebuilt in the 15th century, it is also one of the oldest and most important libraries in the western world. From the missionaries in China, the library collected a large number of manuscripts, maps, pictures and books, most of which show the importance of Macau as the transfer place in the East-West exchanges or as the place where these materials were created or published, and the great influence Macau has had on both Chinese and European cultures. It demonstrates that Macau has played a special and important role in Chinese-Western cultural exchanges.

Pearls in Paradise: Exhibition of Precious Maps and Archives from Vatican Apostolic Library is held in MUST