Home >> MUST News >> Celebrations Gather from All Corners of the World Marking the 20th Anniversary of M.U.S.T. 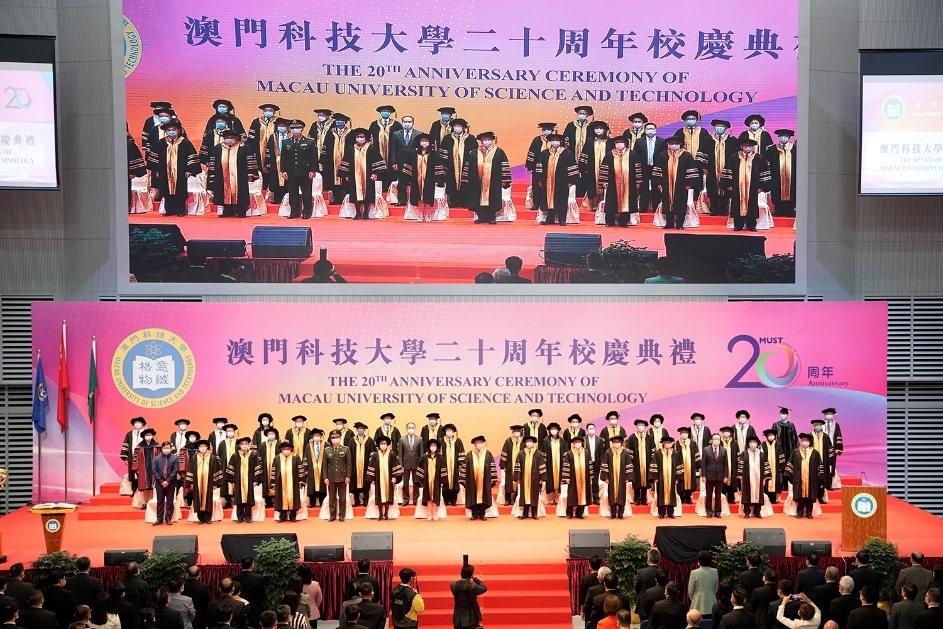 The 20th Anniversary Celebration Ceremony of Macau University of Science and Technology was held in the university’s Block R Academic Complex on the morning of November 30, 2020. Guests from across the nation gathered at M.U.S.T. to offer congratulations to the University for its 20th Anniversary. The Ceremony was officiated by Ms. Ao Ieong U, representative of the Chief Executive of the Macao S.A.R. and Secretary for Social Affairs and Culture. 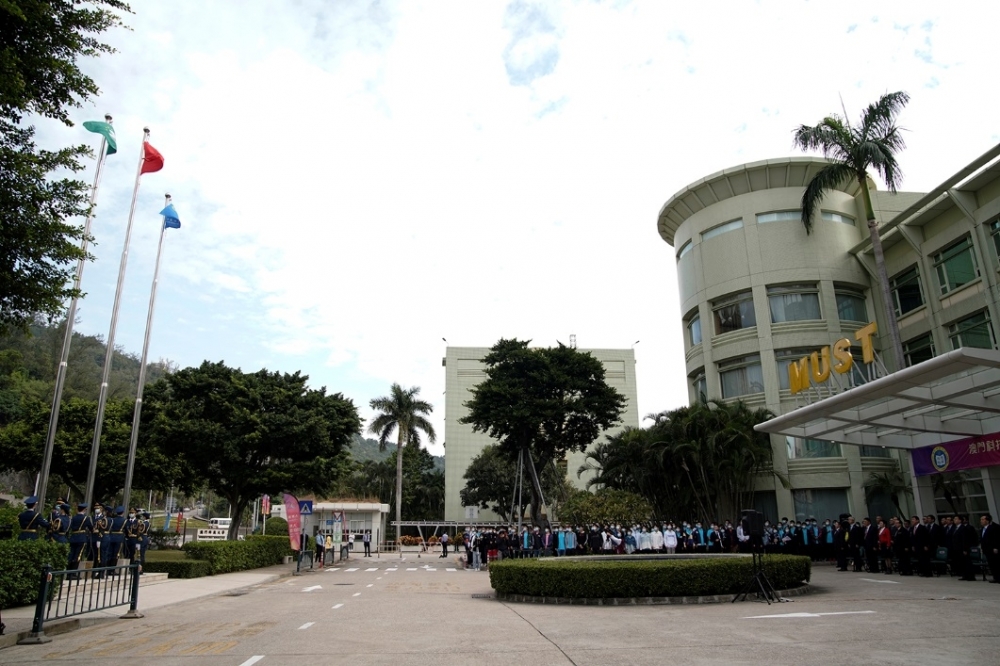 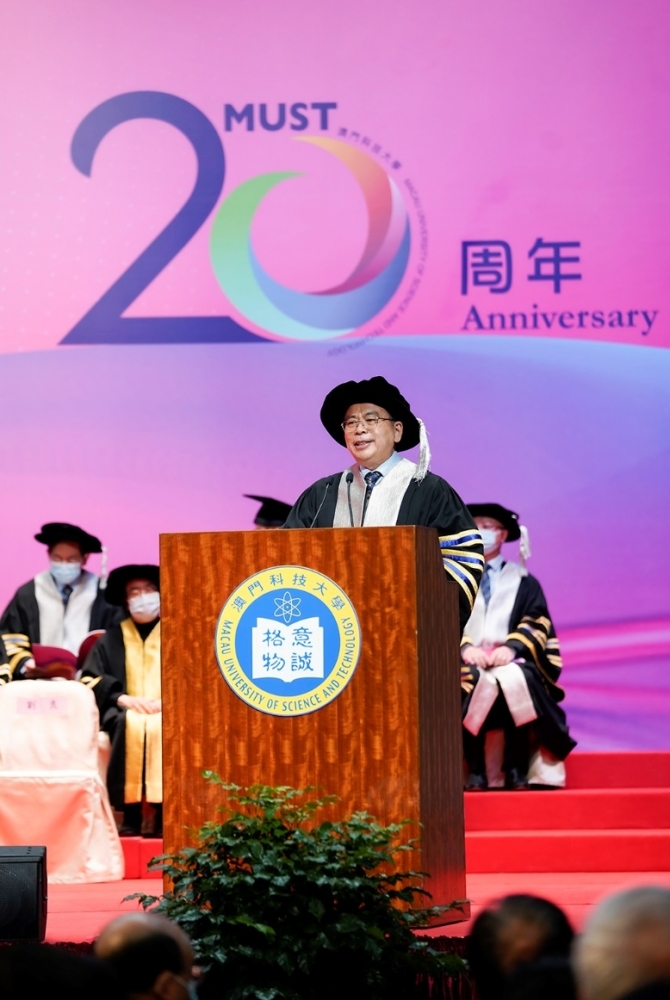 At 9 am in the same morning, M.U.S.T. held a flag-raising ceremony.

The Anniversary Celebration Ceremony opened with the solemn national anthem.

President of Macau University of Science and Technology and Academician of the Chinese Academy of Engineering, Chair Prof. Liu Liang addressed the ceremony. He noted that the whole world was still subject to the impacts and tests of COVID-19, and it was thanks to the one-heart solidarity of the Chinese people and the selfless sacrifice of numerous heroic medical professionals, represented by Academician Zhong Nanshan and Academician Li Lanjuan in the audience, that the University had the opportunity to gather the guests to mark the anniversary; he thus gave the highest regards to the two academicians and the countless medicals they represented. From 20 years ago when it was founded to today, M.U.S.T. has been acting on the university motto, “Dedication to practical studies, Enhancement of knowledge, Ability and Quality”, grounded itself steadily in the direction of cultivating outstanding talents, who are patriotic and love China and Macao, placed value on both natural sciences and social sciences, attached equal importance to teaching and research, seized tight the two key elements that have been driving the university’s development: “quality” and “innovation”, devoted to the development of high-quality education and extraordinary research, and has been striving towards becoming an internationally renowned university. The University was ranked as a top 100 university by Shanghai Ranking’s Ranking of Top Universities in Greater China for nine consecutive years and ranked among the top 300 universities by the World University Rankings of Times Higher Education two years in a row, placed the 32nd among Asian universities in 2020. M.U.S.T. is also the largest-scale comprehensive university in Macao, and it has been an epitome of fast development of higher education under the “One Country, Two Systems” framework. The progresses and development of M.U.S.T. have generated tens of thousands of outstanding talents for the nation and Macao, deepened the academic foundation of Macao in developing higher education and innovation of science and technology, and improved Macao’s academic influence significantly at home and abroad. The University has been fostering noble character and strong social commitment in students, practicing whole-person education, and devoting itself to cultivating high-quality talents for the society, who have strong sense of family and of national commitment, love the motherland, love Macao, have morality and talent, dare to innovate, and meet the needs of globalization in science and technology, and economy. Graduates from the University now scatter across the world. The University has rolled out all-round planning to develop scholarship, committed to develop into a  high-level research-oriented university, and has made prominent progresses. The University has been bearing in mind that “The greatness of a university lies in its great teachers” and “The foundation of a university lies in its scholarship”, and taken various measures to draw nearly 400 outstanding experts and scholars, and excellent mid-aged and young scholars from across the world, to pursue professional excellence at the university and lead the University toward higher-quality development. The University has grown a beautiful, harmonious and smart campus, and successfully transformed the university campus into a splendid landscape in Macao. President Liu Liang pledged that in the days ahead, M.U.S.T. would continue to implement its essential spirits to be practical, enterprising, harmonious and professional, align closely with the “Belt & Road” initiative of our country, cultivate outstanding China-loving, Macao-loving talents, construct priority subjects and extraordinary research areas, focus on what the nation and Macao need, and make its own contributions for the development of an innovative country, the construction of the Guangdong-Hong Kong-Macao Greater Bay Area, the advancement of industrialization of science and research outcomes, and the realization of “Prospering Macao through science and education”. 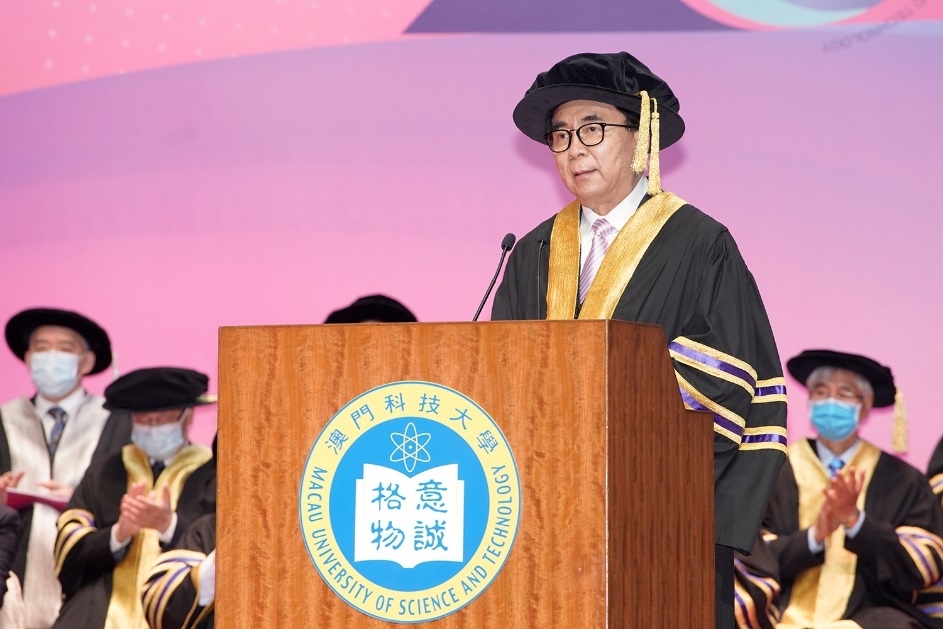 Executive President of the Presidium of the Academic Divisions of the Chinese Academy of Sciences, President of Alliance of International Science Organizations, Academician Bai Chunli, President of the Chinese Academy of Social Sciences and Member of the Academic Divisions, Prof. Xie Fuzhan, Recipient of the Order of the Republic and Representative of honorary doctors of M.U.S.T., Academician Zhong Nanshan, President of Peking University, Prof. Hao Ping, Nobel Prize laureate in physiology or medicine and Distinguished Guest Prof. of M.U.S.T., Dr. Erwin Neher, Representative of Ministry of Science and Technology of China and Director of the Hong Kong, Macao and Taiwan Office, Mr. Ye Dongbai, Representative of the Hong Kong, Macao, Taiwan Office of the Ministry of Education, Deputy Director Shu Gangbo all took turns to speak to congratulate M.U.S.T. 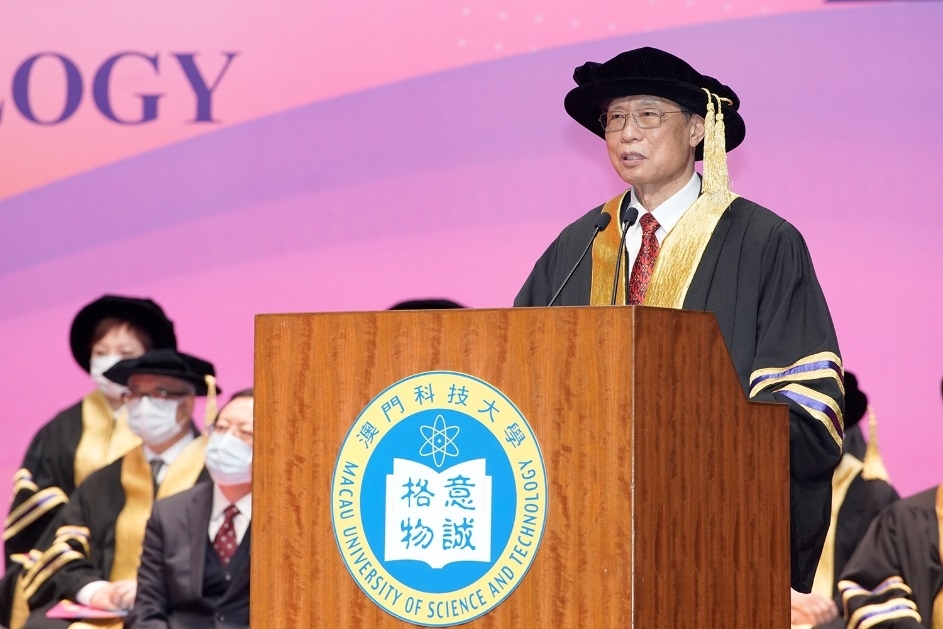 Among those who spoke at the Ceremony, Academician Zhong Nanshan first spoke to give high praises to the Macao S.A.R. for its meticulous work in prevention and control of COVID-19, which has been impressive and has enabled Macao to be a “COVID-free Zone” for many months. Academician Zhong also noted that he was deeply attached to M.U.S.T. and had profound ties with the University. He recalled that he has collaborated with M.U.S.T. in many projects in areas such as Chinese medicine and Chinese pharmacy and medicines. He felt amazed that within only twenty short years, M.U.S.T. was able to join the rank of the top 300 universities by the World University Rankings of Times Higher Education two years in a row and even placed the 32nd among Asian universities this year. This spoke of the efforts and achievements of M.U.S.T. in scientific research, teaching and learning, of which he was deeply impressed. He went on to acknowledge that the fast development of M.U.S.T. was something that could be called a “miracle”. The academician also shared with the audience that during the process of his collaboration with M.U.S.T. in exchanges and joint cultivation of graduate students, he was deeply impressed by the China-loving, Macao-loving spirit of the M.U.S.T. students, which he thought was closely related to the education they received at M.U.S.T. He said that he endorsed the development philosophy of the University and expressed hopes for M.U.S.T. to reinforce cooperation with the mainland to play a more powerful role in basic theories, take advantage of industry-education-research projects in Chinese medicine and medical areas to expedite transfer of research outcomes, and make contributions for national and Macao economy. Finally, he said that he was looking forward to meeting with M.U.S.T. again in the university’s 30th anniversary! 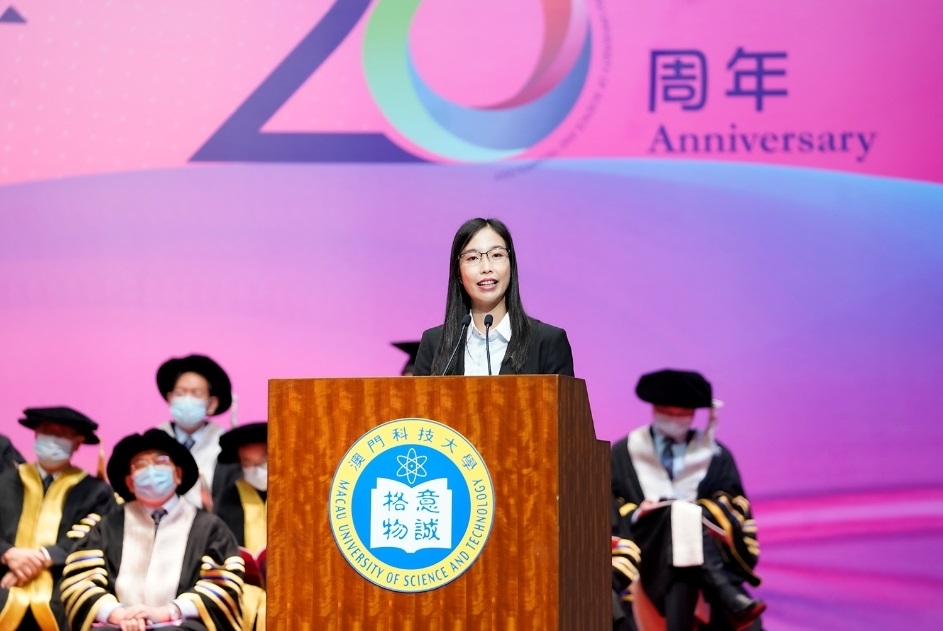 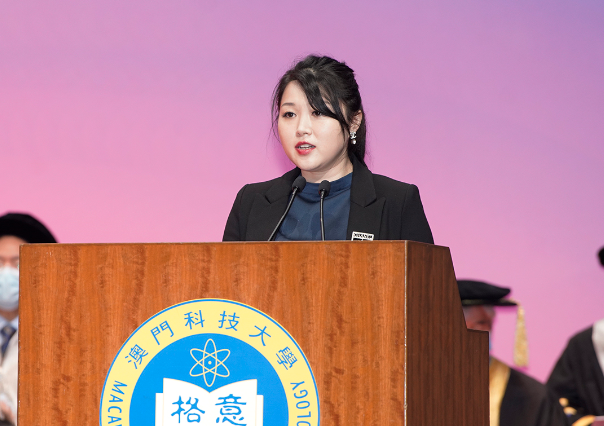 Ms. Hoi Peng, Macao Lawyer and graduate of Class 2004 of Bachelor of Laws, delivered a speech as an alumni representative. She felt amazed and proud for the achievements her alma mater has made, which spoke of the tremendous efforts and hard work of the University and represented the results of the University’ responsiveness in catching the opportunities of the time and its close alignment with the needs of Macao and the nation. 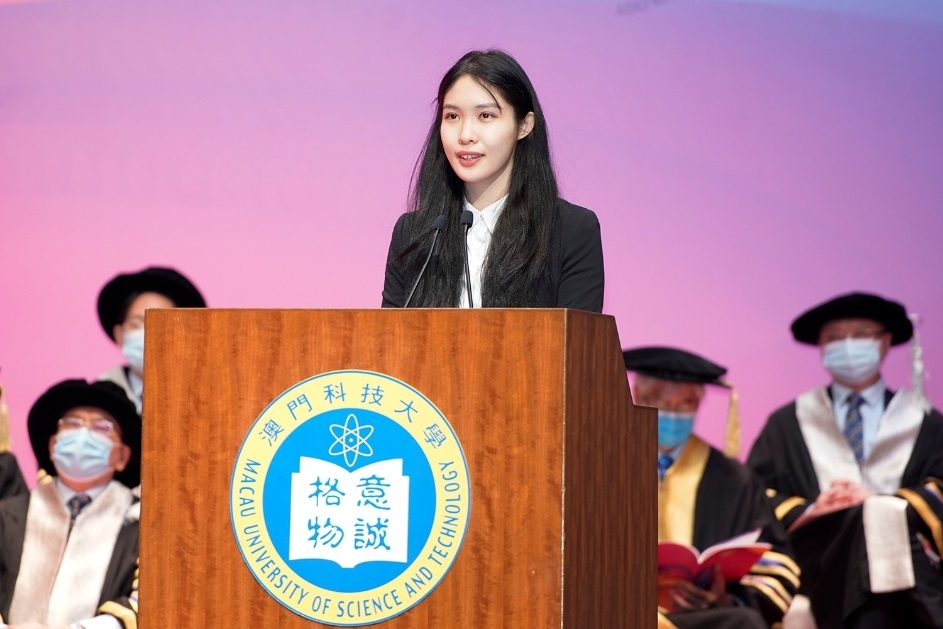 Ms. Zhu Tianyi, senior student of Faculty of Humanities and Arts, gave a speech as a student representative. She expressed thanks to the University for providing the students with abundant learning resources and enriching course curricula, which has enabled the students to accomplish all-round development. The University also has a liberating and rigorous academic atmosphere, which is driven by fact-based and truth-based scientific spirits. This motivates the students to pursue studies with whole heart and overcome difficulties with perseverance. 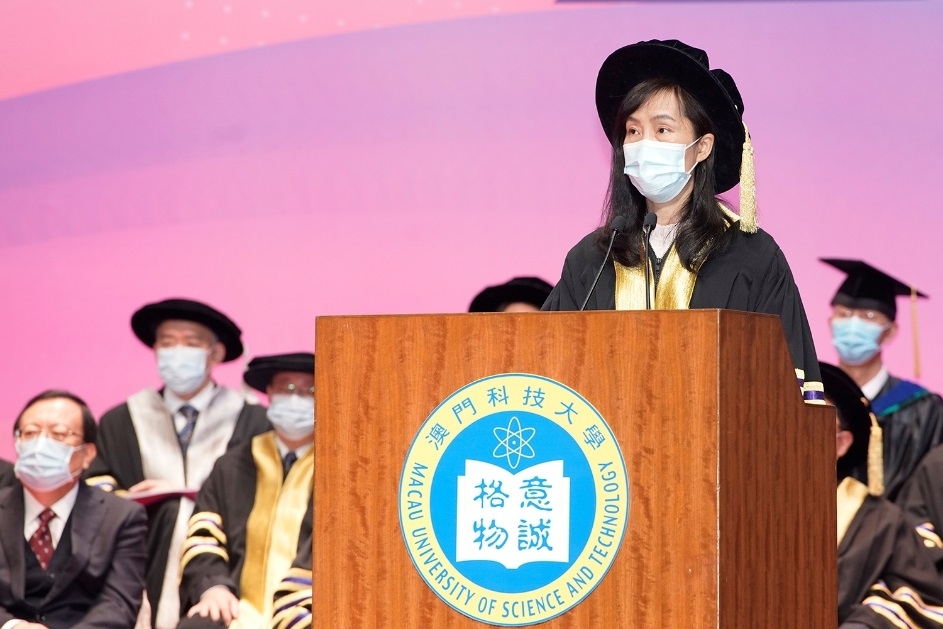 Speech by Secretary Ao Ieong U

Ms. Ao Ieong U, representative of the Chief Executive of the Macao S.A.R. and Secretary for Social Affairs and Culture, delivered a speech. The secretary first expressed sincere thanks to Academician Zhong Nanshan for his support and guidance for the Macao S.A.R.’s work in relation to battlement against COVID-19. She then spoke on behalf of the Macao S.A.R. and extended congratulations to M.U.S.T. for its 20th anniversary. The secretary noted that over the 20 years since M.U.S.T. was founded, it has drawn a great number of outstanding scholars, fostered China-loving, Macao-loving talents, had its academic standards improved significantly, had its overall educational impact expanded continuously, and played a positive role in the improvement of Macao’s educational systems. She said that as Macau University of Science and Technology marched into a brand new era of development, she hoped that the University would carry on its great traditions, build up new achievements, align closely with the needs of the S.A.R. and the national development, cultivate more excellent talents, generate greater research outcomes, and contribute forces to help build the S.A.R., to serve the country, and for the betterment of its society. 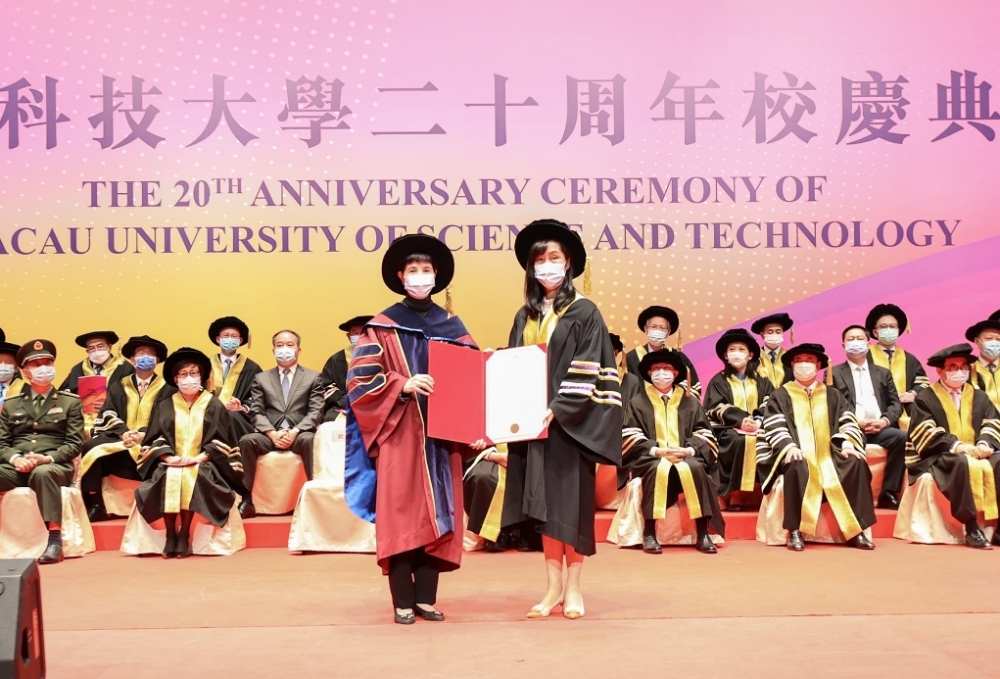 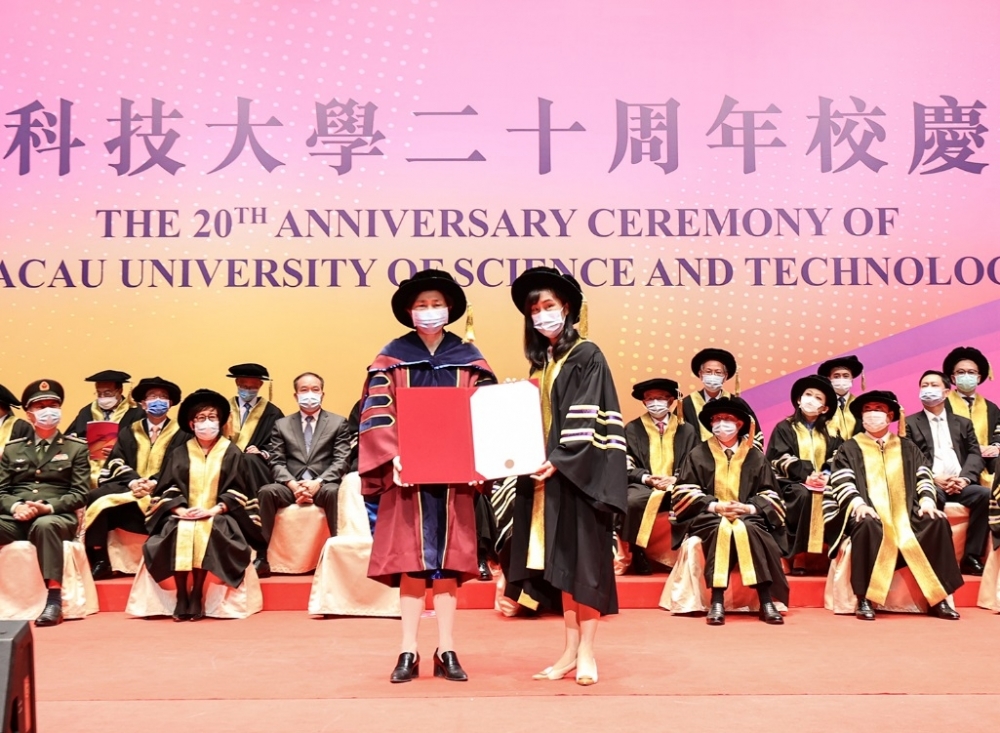 Guests, faculty members and students attending the ceremony responded that they felt delighted and honored to have the opportunity to witness the 20th birthday of M.U.S.T. and gave best wishes to the University for it to have a bright future and for it to foster more talents for the world.

The Anniversary Celebration Ceremony and the relevant events were held in strict alliance with the relevant anti-epidemic guidelines and requirements by the Health Bureau and other relevant departments and on the condition of guarantee of environmental safety.

Celebrations Gather from All Corners of the World Marking the 20th Anniversary of M.U.S.T.