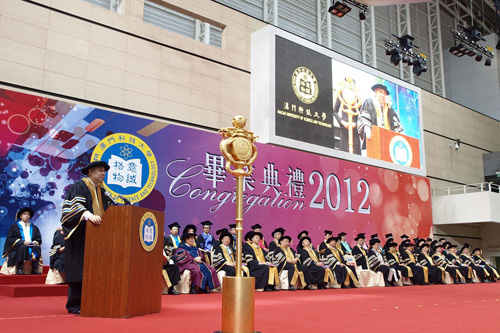 The 2012 Congregation of Macau University of Science and Technology (M.U.S.T.) was successfully held on 9 June (Saturday) 11.00 am at M.U.S.T.’s sports arena. Over 1100 graduates attended the Congregation to receive their Doctoral, Master’s and Bachelor’s degrees. The Chief Executive of Macau SAR, Mr. Fernando Chui San On was the Guest of Honor of the Congregation. Other participating guests included Mr. Tam Chon Weng, Chief of Office of the Chief Executive; Mr. Liu Xiaohang, Director of Department of Culture and Education in Liaison Office of the Central People’s Government in Macao S.A.R; Mrs. Zhang Jinfeng, Deputy Commissioner of the Ministry of Foreign Affairs in Macao S.A.R; Mr. Sou Chio Fai, Coordinator of Tertiary Education Services Office; members of M.U.S.T. Foundation, members of University Council and representatives from government departments, scholarship sponsoring organizations, local enterprises, higher education institutions and secondary schools.

Rector Xu Aoao expressed his warmest blessings on the graduates and his deepest gratitude to the Macau SAR government and Macau society for their continuous support in the development of M.U.S.T.. He also encouraged the graduates bear in mind the ancient faith in patience and persistence—learning to work and to wait, when they fulfill the calling of their future undertaking or that of our dear country. Rector Xu pointed out that the very essence of a university dwells on all-around education and that the advancing of a university is propelled by excellent research performance. The university can now boast a kaleidoscope of teaching patterns, ranging from general education in liberal arts studies to extracurricular activities with a multicultural agenda to better graduates’ mentality and enterprise capability. To cater to the needs of the city, the University is persistent in seeking to provide new degree programs, and it maintains a seamless integration with the city’s intellectual pool to provide a solution to the bottleneck of the city’s human resources, and to promote the city’s capacity for culture, education, and technology.

Prolific, first-class research is a crucial measure of a university’s caliber. Macau is intensely invigorated by the installation of the nation’s only State Key Laboratory of Quality Research in Chinese Medicine. Thanks to the Macau Science and Technology Development Fund, and the M.U.S.T. Foundation, the Laboratory has sustained in inaugural momentum in every aspect, starting with the forging of an illustrious team and introducing world-class facilities in the year following the installation. During this period, the Laboratory has already brought forth a fruitful yield of high level research, including publication in the world’s top-rate magazine Nature, a breakthrough achieved for the first time in academic circles in Macau, and a sign that M.U.S.T.’s research is gaining yet stronger momentum. Further, to enter into a new phase of research by the 20th anniversary of M.U.S.T., the University will quicken its steps in building the Laboratory and will strive to establish more state-level institutes and research centers, to secure a still more brilliant future. From developing all-round education to promoting research performance, M.U.S.T. pursues its goal as a prestige university with uniqueness and influence in the Greater China Region. Meanwhile, M.U.S.T. is committed to serving all lines of the Macau society and is devoted to societal progress.

Professor Zhou Ligao, Chairman of the University Council of M.U.S.T. emphasized that the University Council and the M.U.S.T. Foundation will continue to support the University in its future development. With the efforts of the permanent executive body, the Executive Committee of the University Council, the application for four new degree programs, such as the Bachelor of Pharmacy in Chinese Medicine, and amendments to four existing degree programs, such as the Master of Science (Information Technology) and Doctor of Philosophy in Science being approved, the administrative leaders have support in their striving for a better future for the University.
The Chief Executive of Macau S.A.R., Mr. Fernando Chui San On said the government will continue to implement the policy proposals of increasing the higher education investment, and promote the development of the local higher education institutions. The government continues to encourage the higher education institutions to play a positive role of independent management, gradually establish a school of effective evaluation mechanism which guides the higher education on a higher stage. In addition, he praised the development and achievement made by M.U.S.T., which adhere to the comprehensive culture talents and advocate general education, pay more attention to the development and application of scientific research that will contribute in the aspect of economy and society to Macau S.A.R.

Last but not the least, the M.U.S.T. Congregation adjourned amidst joy and cheers following the speech by representatives of the graduates. 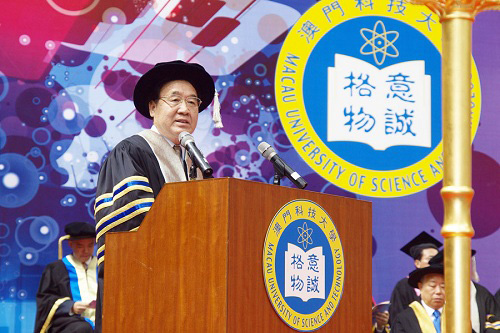 The 2012 Congregation of MUST Witnesses Cultural Achievements