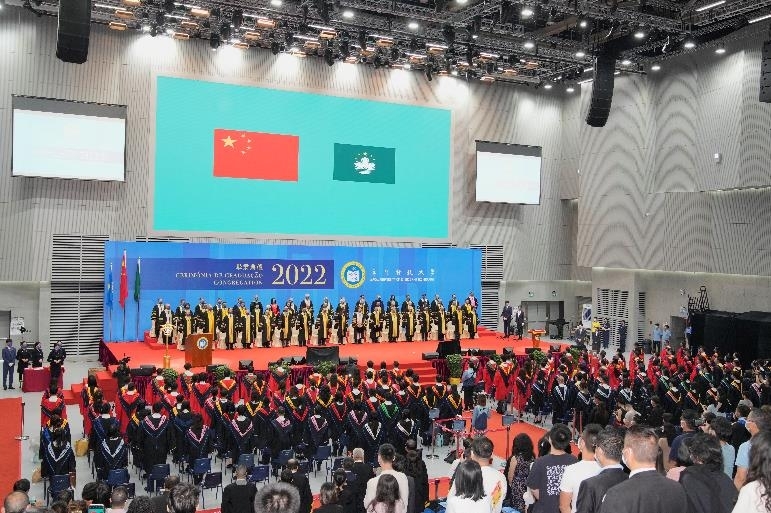 The 2022 Congregation of Macau University of Science and Technology was celebrated in an online-plus-offline mode at the University’s Block R Academic Complex on the afternoon of 5 June 2022. Ms. Ao Ieong U, Secretary for Social Affairs and Culture, representing the Chief Executive of the Macao SAR, officiated the ceremony. Other guests who attended include Mr. Shi Shuzheng, Deputy Chief of the Department of Education and Youth Affairs of the Liaison Office of the Central People’s Government in the Macao SAR, Mr. Gao Yuan, Director of Information and Public Diplomacy of the Commissioner of the Ministry Foreign Affairs in the Macao SAR of the People’s Republic of China, Mr. Kong Chi Meng, Director of the Education and Youth Development Bureau of Macao SAR, Dr. Liu Chak Wan, Chancellor of M.U.S.T., Chairman Chui Sai Cheong of the Board of Trustees of the M.U.S.T. Foundation, Dr. Tong Chi Kin, Chairman of the Advisory Committee of M.U.S.T., members of the M.U.S.T. Foundation, the University Council and the Advisory Board, governmental officials, representatives from major corporations, scholarship patrons, local higher institutions and secondary schools, parents and friends, and faculty members. This year, 3,700 students graduated from the University’s several Faculties and Institutes. Due to the Covid-19 epidemic, this ceremony was held in strict compliance with health authorities’ anti-infection guidelines and requirements. Ensuring a safe environment, the ceremony was broadcasted live online, where the audience took part in witnessing the moment that marked the commencement of a new journey in life. A flag-raising ceremony was held at 9 am, and each Faculty will also hold its own graduation ceremony during this week. 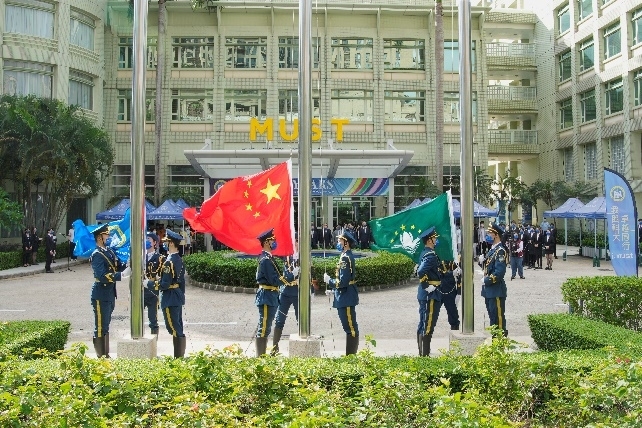 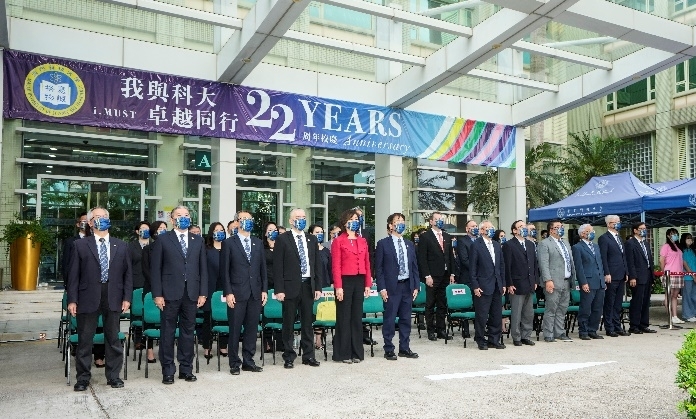 The Congregation opened solemnly under the national anthem. M.U.S.T. President Joseph Hun-wei Lee addressed the ceremony, pointing out that, over the past two decades, the University has grown from “one gate, one building” with four Faculties in its founding years to a comprehensive university with ten faculties and schools and a student enrolment of nearly 17,000 today. The University is a young and vibrant institute that boasts speedy development, unswervingly observing the core values of quality and innovation. Adhering to the strictest internationally-recognized standards, the University strives for excellence in teaching and research. In May 2022, M.U.S.T. was conferred Institutional Accreditation (IA) by the British Quality Assurance Authority for Higher Education (QAA), the first accreditation of the kind in Macao, as recognition of the quality of the University’s curriculum. In 2021, the Central People’s Government named M.U.S.T. one of the two universities in Macao as participants of the development and edification of innovative technology in the Guangdong–Hong Kong–Macao Greater Bay Area (GBA). GBA is the 12th largest economy worldwide, preceded only by G7, BRIC and the Republic of Korea, and viewed as an emerging Silicon Valley of Asia. As a major participant in materializing this vision, M.U.S.T. devotes itself in transforming researches into practical applications beneficial to the society. In October 2021, the Ministry of Science and Technology, PRC, conferred the University a new research platform known as “National Observation and Research Station of Coastal Ecological Environments in Macao”, China’s only wildlife science observatory outside of the mainland to date. University President Lee mentioned that, at a General Assembly of the United Nations, President Xi Jinping of the People’s Republic of China specified that “China strives for carbon peak by 2030 and carbon neutrality by 2060.” Such a goal requires enormous efforts and young people with an open mind, a global view and interdisciplinary thinking. To this spirit, M.U.S.T. recently established the Faculty of Innovation Engineering to cultivate new generations of engineers with sound scientific training and interdisciplinary thinking to meet the demands of the new economy. President Lee called on students to always stay positive rather than dwell on trifles, with faith that some form of return is to come. As he said, failure lies not in results but in an unwillingness to try. The University should therefore refuse to give up on students but inspire them to believe in themselves, hold fast to their essence, make themselves fittingly valuable, and embrace their very own bright future with health and passion. 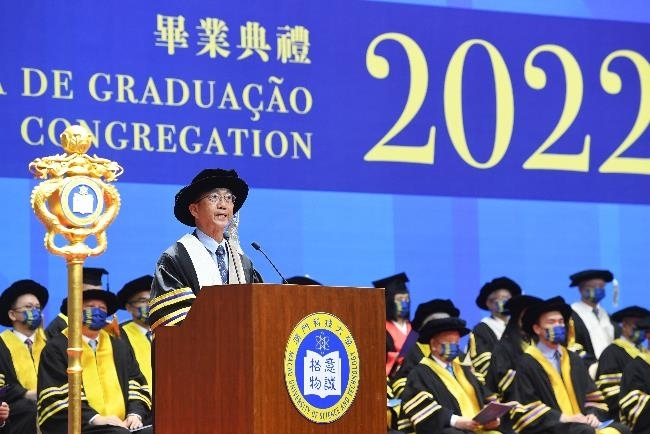 Ms. Ao Ieong U, Secretary for Social Affairs and Culture, representing the Chief Executive of the Macao SAR, delivered a speech, noting that, since its founding years, M.U.S.T. has committed its missions on teaching and research, and acted closely in line with the needs of development of Macao and of the nation, complied with the policies and guidelines of the Macao SAR Government, valued research as well as education, and made appreciable progress in skill cultivating and research. By enlisting the most gifted around the world and applying the best educational expertise available, the University has unceasingly raised its pedagogic standards and established various new curricula to foster talents that meet the needs of science and technology and a globalized economy, possess outstanding moral and intellectual character, and hold a China-loving, Macao-loving bearing. The Secretary also encouraged graduates to attain life accomplishments fitting of their youth and to pursue greater development in personal careers while contributing to the development of Macao and of the nation. 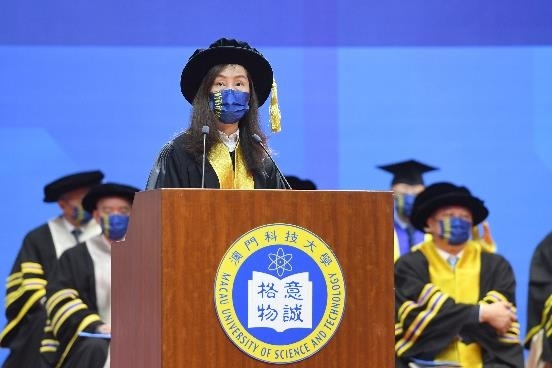 According to Deng Yi Tong, graduating doctoral student of Faculty of Hospitality and Tourism Management and Zhu Ming Ze, graduating undergraduate in accounting of the Faculty of Business, who spoke on behalf of the graduates, M.U.S.T. is a place where dreams are kick-started and academic capabilities augmented, where students experience the development opportunities presented by the University as integrated into the GBA and enter an all-rounded platform for productivity, learning and research. The University affords its students immense equipping and a wide landscape for growth with its ever-rising reputation. One must have high aspirations to soar high and, most importantly, stay true to the University motto, “Dedication to practical studies, Enhancement of knowledge, Ability and Quality”. 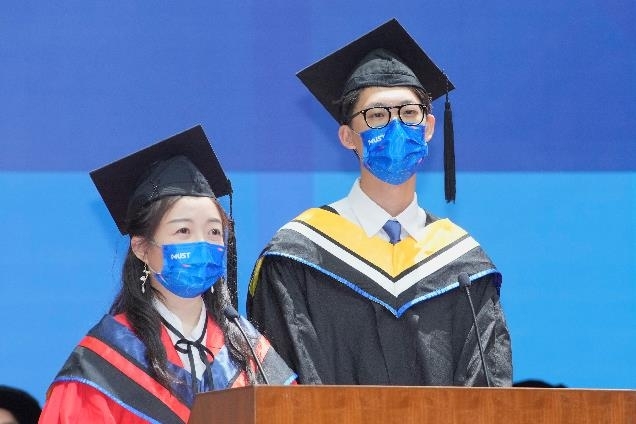 On the same day, the second Joint Conference of the M.U.S.T. Foundation, the University Council and the Advisory Board was held in N101 Hall, with a turnout of nearly 50, comprising members of the Council and those of the Board. The conference was moderated by Dr. Liu Chak Wan, Chancellor of M.U.S.T., where President Joseph Hun-wei Lee reported on the results of 2021/2022 and plans, and Council members spoke on the University’s future.