Dr. Liu Chak Wan, Chancellor of Macau University of Science and Technology, and President Liu Liang, Academician of the Chinese Academy of Engineering, led the university management and scientific research specialists on a visit to Director Fu Ziying of the Central People’s Government Liaison Office in the Macao Special Administrative Region in the afternoon of the 28th of August. Director Fu gave full affirmation to M.U.S.T., recognizing the significant achievements and positive role it played in cultivation of talent, innovation of science and technology, prevention and control of epidemics, and commitment to social services. 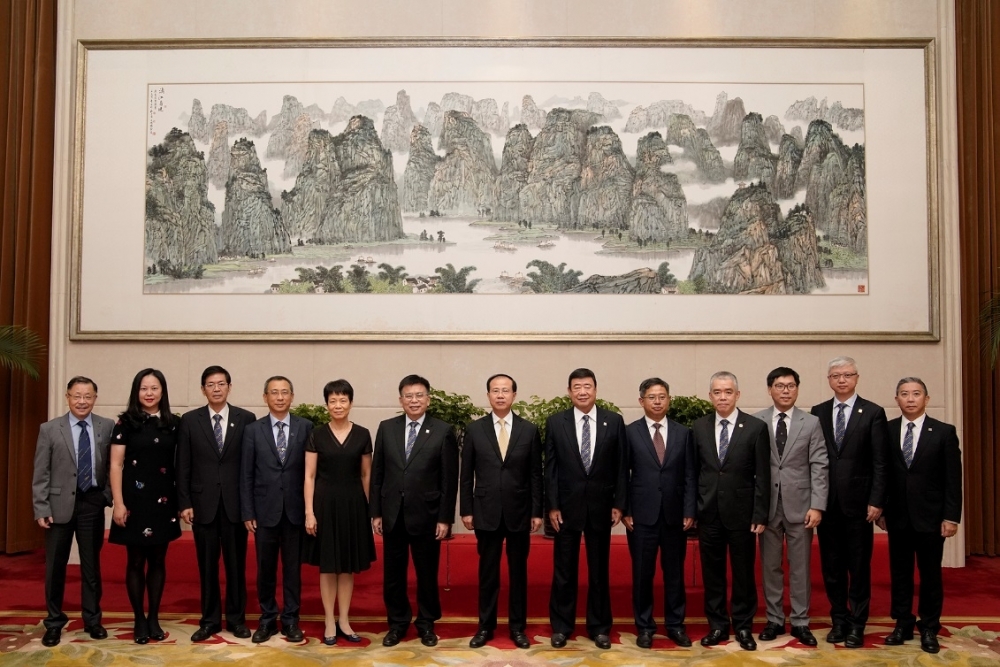 Director Fu expressed welcome to the visiting delegation from M.U.S.T. and said that Macao has made significant changes over the past 20 years since it returned to the motherland, a major mark which lies in the development of its education sector. The director praised M.U.S.T. for its commitment to furthering Macao’s education cause, which has earned itself growing recognitions and impacts in Macao and Mainland China; the University has become a popular choice with great appeal to mainland Chinese students coming out of the Chinese College Entrance Examinations. As such, the Director extended congratulations to M.U.S.T. on its remarkable achievements in improvement of educational quality and research performances, and specifically to President Liu Liang on his being elected Academician of the Chinese Academy of Engineering, becoming Macao’s first academician.

Chancellor Liu Chak Wan expressed appreciation to Director Fu for making time out of his tight schedule to welcome the M.U.S.T. delegation. The Chancellor recalled that his earliest vision for M.U.S.T. when it was first founded was to align the University to co-advance with the other universitates in Macao. He felt delighted that 20 years later, M.U.S.T. is growing steadfast under the leadership of the university management teams over the years. He shared the kind words of Minister Chen when he received the visiting delegation from M.U.S.T. to the Ministry of Education in March, where the Minister expressed hopes for M.U.S.T. to build on the impressive achievements it has made and make greater progresses to “Grow in Macao, prosper in the Greater Bay Area, and thrive in the world”.

President Liu Liang responded with thanks to the Central People’s Government and the Central People’s Liaison Office for their support and guidance, and to the mother nation for its fostering and cultivation of himself. He then gave a report on the overall status of M.U.S.T. and its main new developments in recent years. M.U.S.T. has carried out a full implementation of the important instructions from Chairman Xi Jinping to Macao universities, upholding and acting in the spirit of patriotism to the country and love to Macao, fostering a sense of commitment to family and to the country in students, making major efforts to bring in and cultivate outstanding principal leaders for subjects and disciplines and mid-age and young academic backbones, growing a competitive and sustainable teaching force, being grounded on a quality-based, innovation-driven development path, and elevating the higher education of M.U.S.T. to international standards and recognitions. During the pandemics, the University carried out a speedy deployment of “Cloud Classroom” and online teaching and devoted fully to prevention and control of the epidemics on campus. Furthermore, the University quickly assembled an excellent research force and ranked 1st in number of key science and technology research projects subsidized by the S.A.R. Government, becoming the main battleground of Macao’s science and technology efforts to fight against the epidemics.

With the great support of the Central People’s Government, the Ministry of Science and Technology and the Macao S.A.R. Government, the University set up the State Key Laboratory of Quality Research in Chinese Medicines, which represents the national standard of Chinese medicine research, and the only state key laboratory of our country in the field of space science, the State Key Laboratory of Lunar and Planetary Sciences, and received a great many awards and prizes of state, provincial and ministerial levels. The University has been implementing a “Three-Step-Approach” path firmly, which comprises the development of an outstanding talent force and frontier technology platforms, publication of high-level papers and patents, and promotion of industrialization for research outcomes and patents. This has laid a solid foundation for the University in developing innovative science and technology and industrialization, which ensures the improved efficiency and success rate for transfer of M.U.S.T. research achievements, and above all the bright prospects in industry-education-research synergetic development. M.U.S.T. remains the University with the most patents granted in the Hong Kong and Macao region. Currently, the University places priority in the third step – promotion of industrialization for research outcomes and patents. In the meantime, the University aligns closely with the emerging demands for innovative talents from the Guangdong-Hong Kong-Macao Greater Bay Area, by deepening partnership and cooperation, and integrating proactively into the Great Bay Area national development strategy.

President Liu Liang expressed that after 20 years’ relentless efforts, M.U.S.T. now owns a plethora of state-level academic platforms. The University has made major efforts to bring in high-level talents from home and abroad, fostered many outstanding postdocs and postgraduates, and has become a major driving force for Macao in its strides to developing innovative science and technology industries and facilitating economic transformation. It is hoped that the Central People’s Liaison Office would endorse the “Prosper Macao through science and technology” development strategy of the Macao S.A.R. Government for it to introduce high-level talents and amplify and reinforce Macao’s outstanding teaching and research forces.

Director Zhang Keke of the State Key Laboratory of Lunar and Planetary Sciences gave a report on Macao’s first science satellite “Macao Science 1” and the development of other space science research projects.

Director Fu Ziying listened attentively to the systematic work reports from M.U.S.T., gave full affirmation to the University for the significant achievements and uplifting role it played in cultivation of talent, innovation of science and technology, prevention and control of epidemics, and commitment to social services, and shared his important insights. The director hoped that M.U.S.T. envisions the general trends accordingly, aims afar and ahead, grabs development opportunities, and strikes towards new heights. Firstly, he expects M.U.S.T. to continue to carry on high-quality education and work hard to train talents for the country and Macao, implement to greater depth the important spirits demonstrated by Chairman Xi Jinping in his reply letter to Macao universities, be grounded in the right directions of education, base itself on quality, make contribution to the successful implementation of “One Country, Two Systems” for national development and for Macao and foster generations of constructors and successors. Secondly, he also expects the University to move forward science and technology innovations and contribute to innovation-driven national progress, cater to the needs of the nation, exert Macao’s strengths and M.U.S.T.’s advantages, formulate a more accurate development positioning, take advantage of innovative platforms such as the State Key Laboratory of Quality Research in Chinese Medicines and the State Key Laboratory of Lunar and Planetary Sciences, invigorate the research forces, strive to make breakthroughs in prospective basic research and leading science and technology innovations, create science and technology outcomes, and make contributions to innovation-driven national strategy. Thirdly, the Director expects the University to stand in close line with the needs of Macao, contribute to the adequately diversified development of Macao economy by providing new impetuses, focus on the very essences of education, amplify and maximize the advancement of higher education, extend its outreaches to other educational areas, drive efforts to make the education industry an important link in realizing adequately diversified development of economy, concentrate efforts on improving the ability of transferring research outcomes in Chinese medicine and space sciences, and foster and empower emerging industries. Finally, the director expects the University to engage proactively in the construction of the Greater Bay Area, deepen exchanges and cooperation in education, identify more clearly the development objectives, specific areas and implementation measures of the University’s involvement in the Greater Bay Area, take advantage of the geographical advantages of Hengqin to boost the education and scientific research industries, improve the teaching and research forces, draw top international scholars and specialists, foster top principal leaders for all subjects and disciplines, and build a highland for great talents. The Central Government and the Macao Liaison Office would continue to give support to the development of Macau University of Science and Technology.