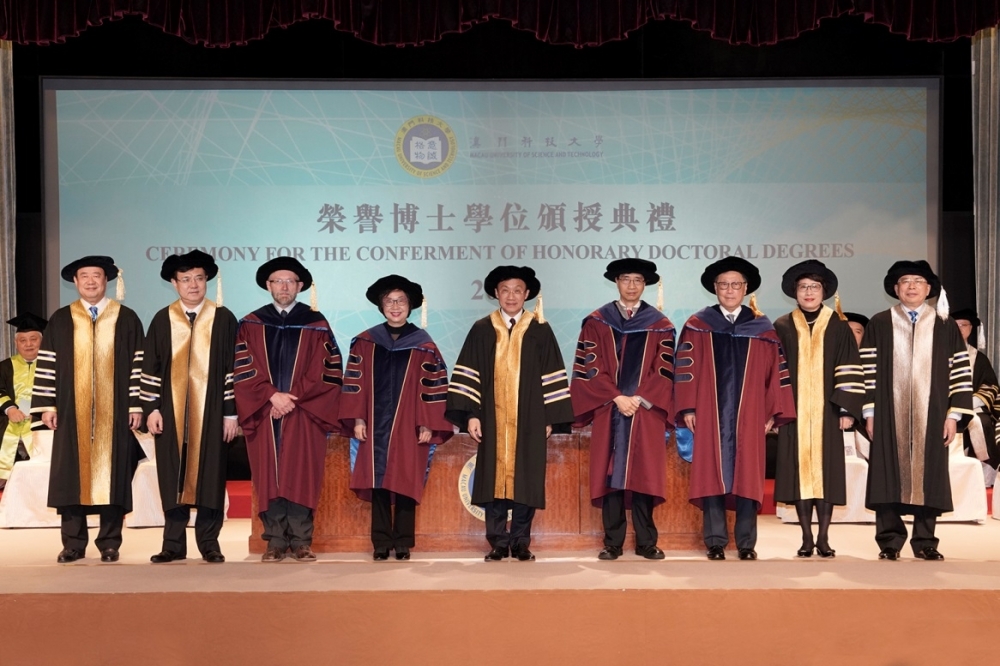 In celebration of the University’s 19th anniversary, Macau University of Science and Technology held the Ceremony for Conferment of Honorary Doctoral Degrees at the Block D Conference Hall on March 27th, 2019. Dr. Alexis Tam Chon Weng, Secretary for Social Affairs and Culture of the Macao S.A.R. Government, attended and officiated the Ceremony.

Officiating guests at the Ceremony include Mr. Xue Xiaofeng, Deputy Director of the Liaison Office of the Central People’s Government in the Macao S.A.R.; Ms. Wang Dong, Deputy Commissioner of the Office of the Commissioner of the Ministry of Foreign Affairs of the People’s Republic of China in the Macao S.A.R.; Dr Liu Chak Wan, Chancellor of M.U.S.T., Chairman Zhou Ligao of the University Council, Mr. Tong Chi Kin, Chairman of the University Advisory Committee and Chair Prof. Liu Liang, President of M.U.S.T. Also attending the Ceremony were Mr. Chang Kun Hong, Acting Director of the Macao Higher Education Bureau, Ms. Leong Vai Kei, Deputy Director of the Education and Youth Affairs Bureau, members of M.U.S.T. Foundation, the University Council and the University Advisory Committee, representatives of other higher institutions, scholarship-providing organizations, and representatives of secondary schools, societies and associations. Guests and University teachers and students witnessed the historical moment.

Prof. Yuen Kwok-yung is the world’s renowned microbiologist and expert in infectious diseases; his discovery of novel microbe viruses of emerging infectious diseases earned him the honor of “Asian heroes of the year” by TIME Magazine Asia. Prof. Witold Pedrycz is well achieved in intelligence learning, knowledge mining and data sciences; he was the recipient of the Norbert Wiener Award in 2007. Mr. Ho Hao Tong is a well-known Macao entrepreneur; he is Vice President of the Macao Chamber of Commerce and Chairman of Tai Fung Bank Limited; he has made impressive achievements in his field and has made extraordinary contributions to Macao’s social development and economic prosperity. Ms. Ho Teng Iat was Deputy Secretary of the Preparatory Committee for the Macao S.A.R. region; she is Deputy Director of the Hong Kong Macao and Taiwan Committee of the Chinese People’s Political Consultative Conference (CPPCC) and holds many other important positions; she’s made outstanding contributions to Macao’s return to the motherland and its societal development. Prof. Jules A. Hoffmann confirmed the key genetic coding on identifying pathogens and triggering immune responses, and won the Nobel Prize for Medicine in 2011. Prof. Peter Arthur Diamond is the winner of the 2010 Nobel Prize in Economic Sciences; the overlapping-generations model, which he developed, laid the theoretical foundations of macroeconomics. Prof. Andrew Chi-Chih Yao is internationally recognized as a pioneer in algorithm analysis, cryptography, and quantum computation; he received the Turing Award in 2000, and remains the first ever and, so far, the only Chinese scientist who’s won the honor. Mr. Takeo Kawamura is President of the China-Japan Friendship Cultural Exchange Promotion Association; his work has enhanced diplomatic and non-governmental exchanges between China and Japan. The eight honorary doctors have each made outstanding achievements in their respective fields and significant contributions to science and technology innovation, societal advancement, economic growth and human welfare. They are indeed living role models, whom teachers and students at M.U.S.T. look up to and strive to become. 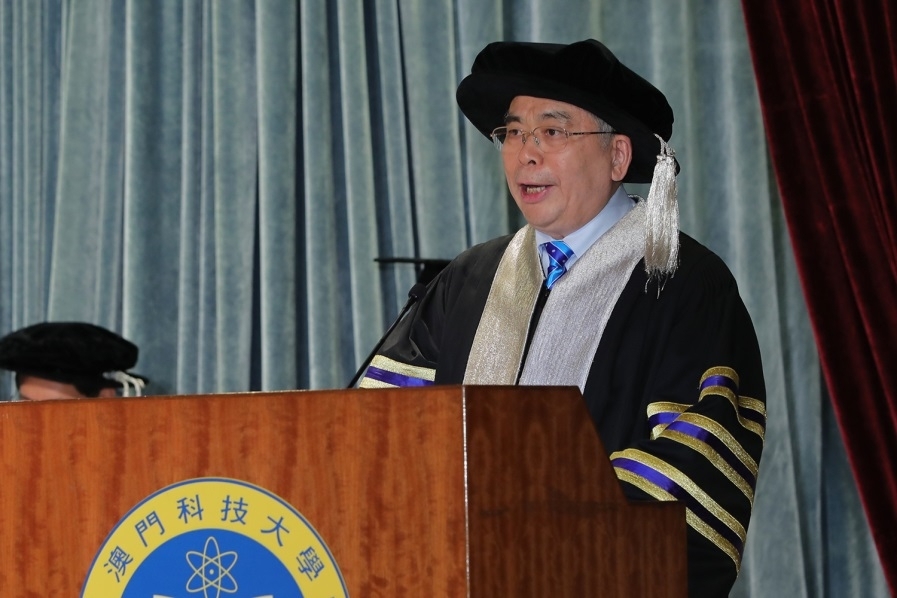 While addressing the Ceremony, President Liu Liang gave the highest regards and the warmest congratulations to the eight honorary doctors on their success. He noted that as the highest of all honors conferred by M.U.S.T. to individuals, the lifelong honorary doctoral degrees represent the highest recognition by the university to contemporary elites, who are scholarly outstanding and socially prominent and have contributed significantly to societal development and human well-being. The president pointed out that the University had achieved new development and progress over the past year with respect to curricula and programs, training of talents, academic research, journal publication, patent authorization, teachers’ and students’ awards, and student employment; new history was written while new records were made. Looking forward, M.U.S.T. will fully seize the opportunities and embrace the brand new platforms made available by the Bay Area in an open, proactive, practical and innovative fashion, aim to expand and deepen high-standard cooperation in the Bay Area through various channels and in multiple forms, contribute to technological innovation and fast development of high-tech industries in the Bay Area, realize the grand visions of M.U.S.T., and contribute with the University’s own share to the successful implementation of the Guangdong-Hong Kong-Macao Greater Bay Area national strategy. 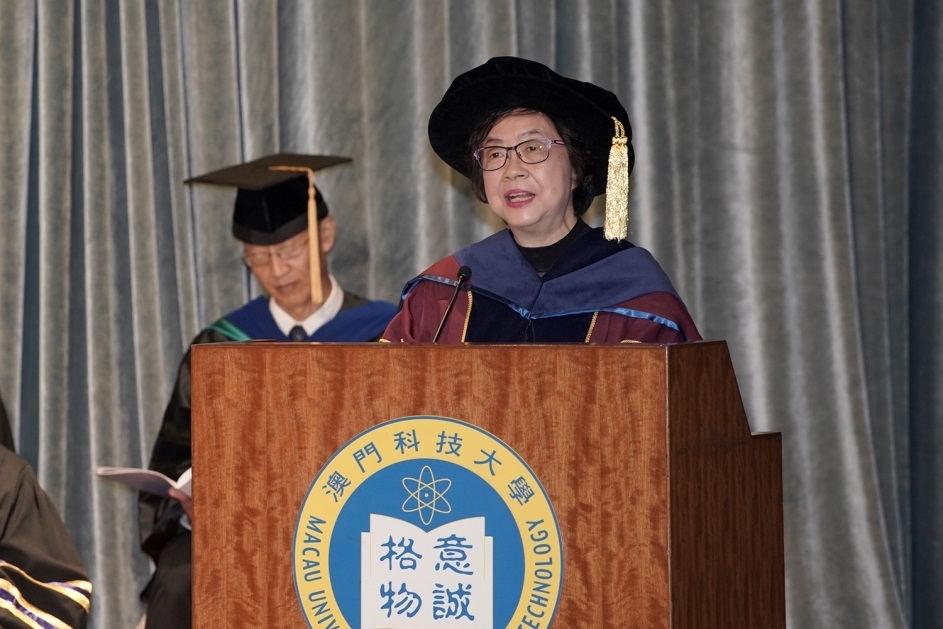 Following the President, Ms. Ho Teng Iat delivered a speech on behalf of all the honorary doctors. She noted that over the University’s 19 years’ development, M.U.S.T. has been growing steadfast in sync with the Macao S.A.R., and has made impressive accomplishments. As a result, she felt it a great honor to join M.U.S.T. and become a member of the University. Ms. Ho commended the University on its achievements, saying that as a significant member of the higher education community of the Bay Area, M.U.S.T. had generated a series of major science and technology innovation outcomes that greatly contribute to the national Chinese Medicine cause and the national space science course. In the meantime, the University began to offer various programs that met the emerging demands of the society and the time, and cultivated many young talents fulfilling the University Motto, “Dedication to practical studies, enhancement of knowledge, ability and quality”. The honorary doctor said, “Thriving youths lead to a thriving nation; powerful youths build a powerful country”, and the youths bear the greatest wishes of generations of Chinese to prosperity and rejuvenation. She thus hoped that the young teachers and students at the University strove to pursue knowledge and seek perfection in their professions so that they could utilize their knowledge and talent to serve the nation. 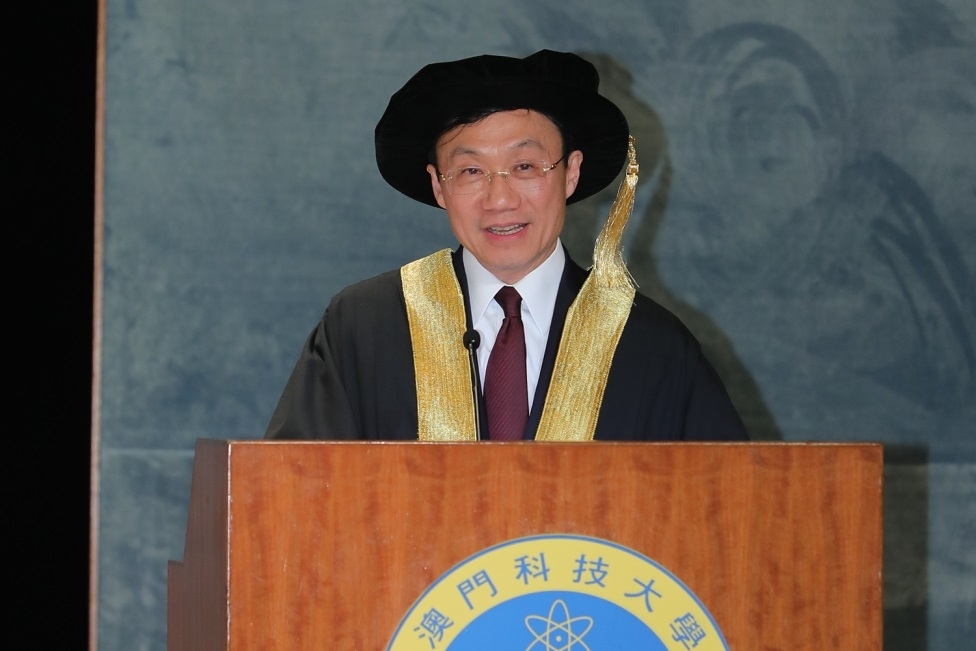 Dr. Alexis Tam Chon Weng, Secretary for Social Affairs and Culture of the Macao S.A.R., also addressed the Ceremony. The secretary congratulated the eight honorary doctors on their success and paid the highest regards to them on behalf of the Macao S.A.R. Government. The Secretary further noted that M.U.S.T. has achieved continuous success since its establishment 19 years ago, especially in programs and curricula, training of professionals, academic research, paper publications, and teachers and students awards. In particular, M.U.S.T. has been standing closely with the policies of the S.A.R. Government and answering the needs of the S.A.R. for further development. It has contributed with wisdom in the relevant areas of Macao’s integration into the bigger picture of national development, and it has played a positive role in Macao’s development of higher-standard education and innovative technologies. Secretary Tam expressed hopes that the University takes on initiative to integrate into the bigger picture of national development, takes up its commitments and exerts its strengths, and acts to help make Macao a core engine in leading the development of the Bay Area, so as to train more professional talents, create more science and research outcomes, propel adequate diversification of economy in Macao, contribute to the construction of the Belt and Road initiative, and reward the motherland and Macao with the most distinguished performances and the most abundant achievements. 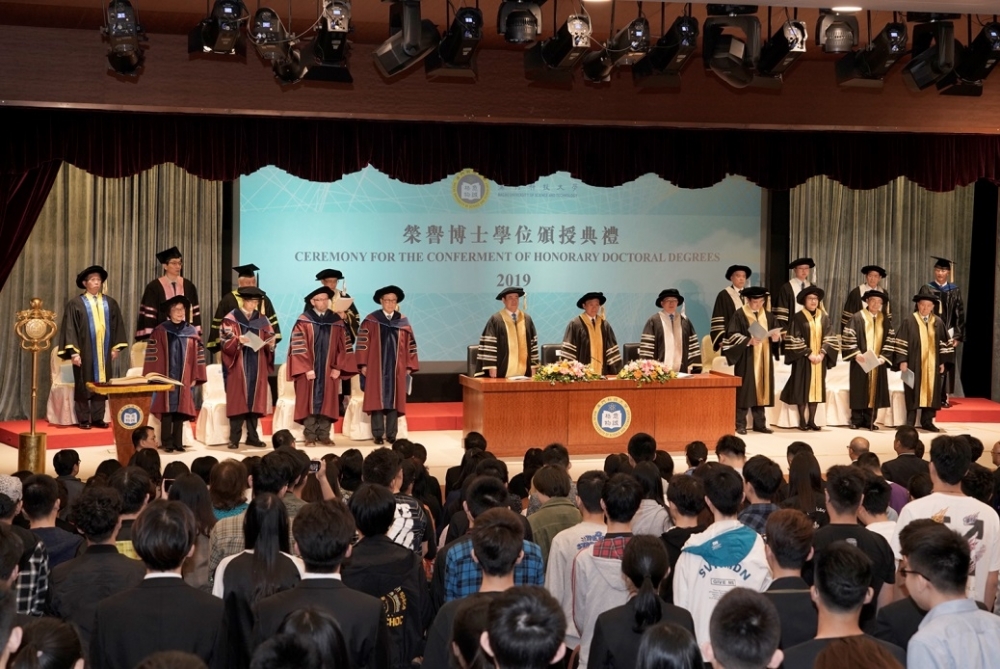