Home >> MUST News >> M.U.S.T. Holds Opening Ceremony and Ceremony for the Conferment of Honorary Doctoral Degrees President Liu Liang Calls on Students to Become Man of Determination and Action

M.U.S.T. Holds Opening Ceremony and Ceremony for the Conferment of Honorary Doctoral Degrees
President Liu Liang Calls on Students to Become Man of Determination and Action 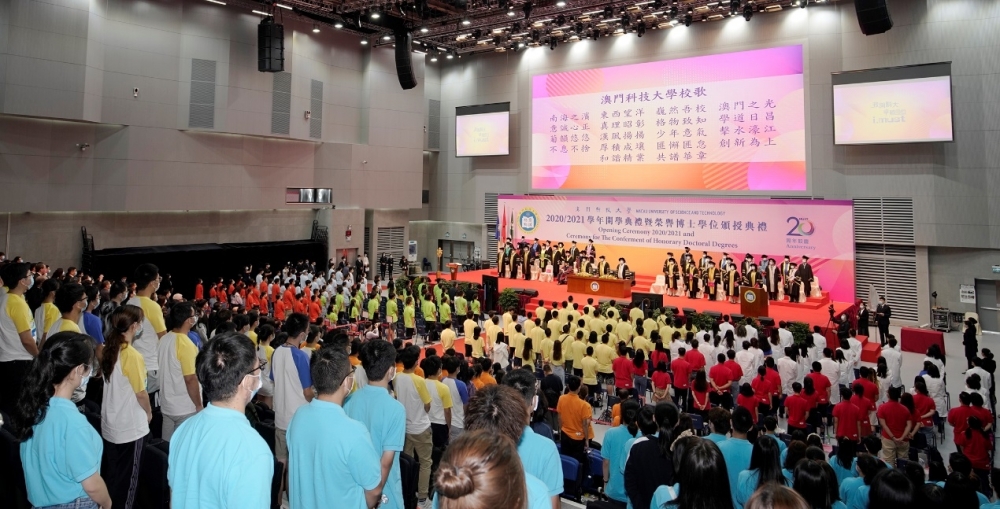 Macau University of Science and Technology held the 2020/2021 Opening Ceremony and Ceremony for the Conferment of Honorary Doctoral Degrees in the university’s new Block R Academic Complex at 10 am of September 25, 2020. Ms. Ao Ieong U, Secretary for Social Affairs and Culture of the Macao S.A.R., officiated the ceremony in person. The ceremony was held in strict compliance with the anti-epidemic guidelines and requirements by the Health Bureau, with the premise of environmental safety being guaranteed. This academic year, M.U.S.T. welcomes over 2700 pre-u and undergraduates, plus nearly 2200 graduate students. Also at the ceremony, M.U.S.T. conferred honorary doctoral degrees upon six world’s outstanding individuals. They are Academician Ding Jian, Prof. Tasuku Honjo, Prof. Frances Ashcroft, Ms. Ho Sut Heng, Academician Li Lan Juan and Prof. Zhou Li Gao.

Prior to the Ceremony, M.U.S.T. held a Flag-Raising Ceremony for the New Academic Year at 9 am. 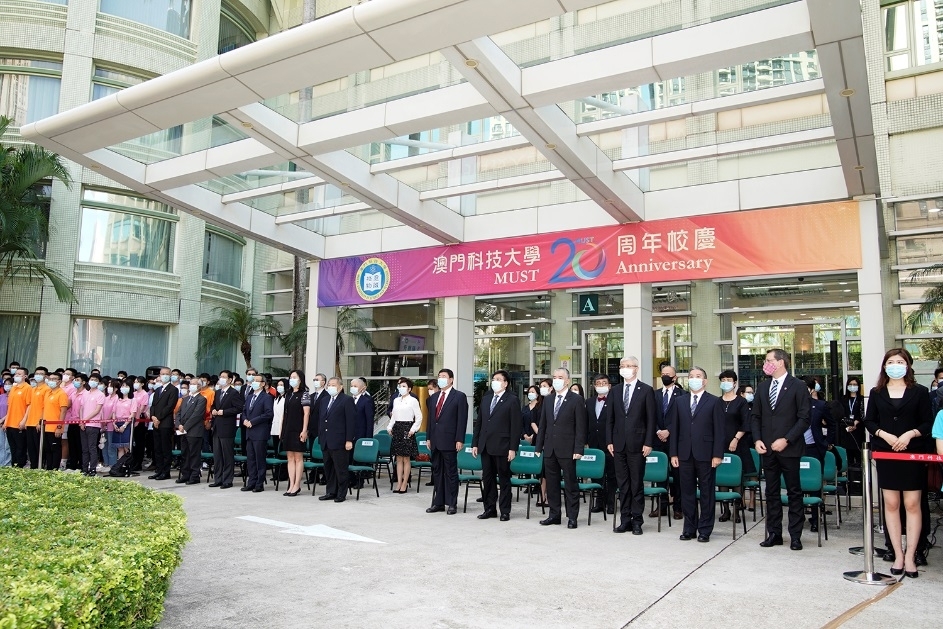 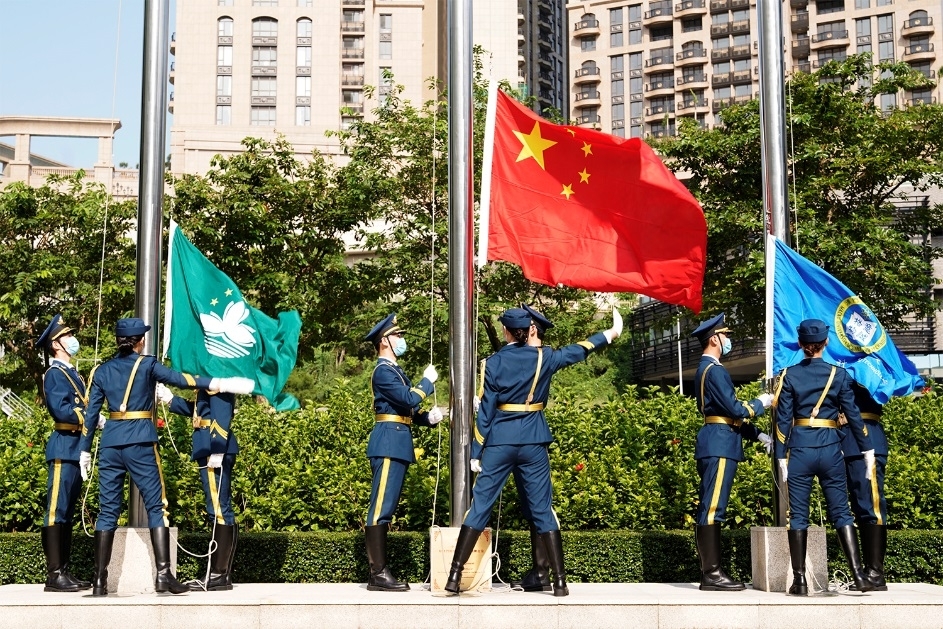 Principal guests attending the Ceremony include Mr. Luo Yonggang, Deputy Director of the Liaison Office of the Central People’s Government in the Macao S.A.R., Ms. Wang Dong, Acting Commissioner of the Officer of the Commissioner of the Ministry of Foreign Affairs of the People’s Republic of China in the Macao S.A.R., Mr. Chang Kun Hong, Acting Director of the Higher Education Bureau, Dr. Liu Chak Wan, Chancellor of M.U.S.T., Mr. Chui Sai Cheong, Chairman of the Board of Trustees of the M.U.S.T. Foundation, Mr. Tong Chi Kin, Chairman of the Advisory Committee of M.U.S.T., representatives of the M.U.S.T. Foundation, the University Council and the Advisory Committee, and representatives of other organizations and local universities and secondary schools. 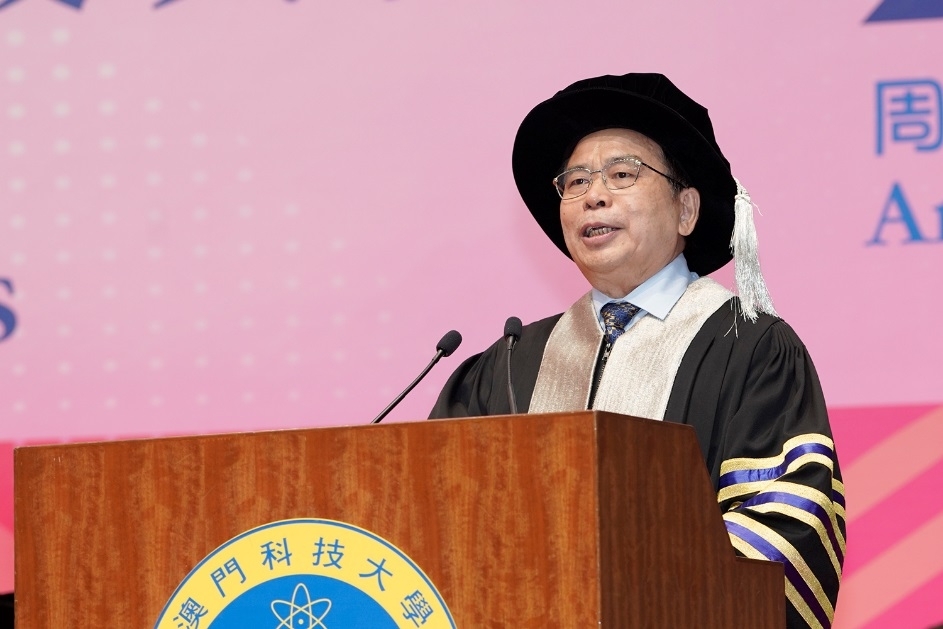 President of the University, Chair Prof. Liu Liang delivered a speech at the ceremony. The president said that the reason why we had successfully brought the epidemic under control in our country and why the university teachers and students were able to meet in Macao for the opening ceremony was because of those who have fought for people’s health and life safety and made selfless contributions; he, therefore, took the opportunity to give the highest regards to all the selfless heroes. President Liu Liang then spoke on behalf of the university teachers and students to pay respect to the six world’s outstanding individuals who received honorary doctoral degrees and extended warm welcomes to the new students. Since the University was founded 20 years ago, it has been upholding its missions to cultivate outstanding talents who love our country and love Macao, develop extraordinary research in cutting-edge areas, and foster economic development and societal progress in Macao. It has accomplished fast growths in its educational standards, science and technology innovation abilities, and national and international academic impacts. In the new era, the University will fully seize the historic opportunities afforded by the development of an innovative country and the Guangdong-Hong Kong-Macao Greater Bay Area, integrate proactively into the greater picture of national development, root in the Greater Bay Area, assume a global outlook toward the world, get into more rigorous planning, push forward through practical actions, and strive to realize a high-quality educational formation featuring more novelty, breadth and practicality. Finally, President Liu expressed hopes for the students to value their university time, continue to work hard to pursue studies, aspire high, draw the line between right and wrong, compass their conducts by integrity, draw inspirations and motivations from the achievements of the honorary doctors, and become men of actions and determinations. 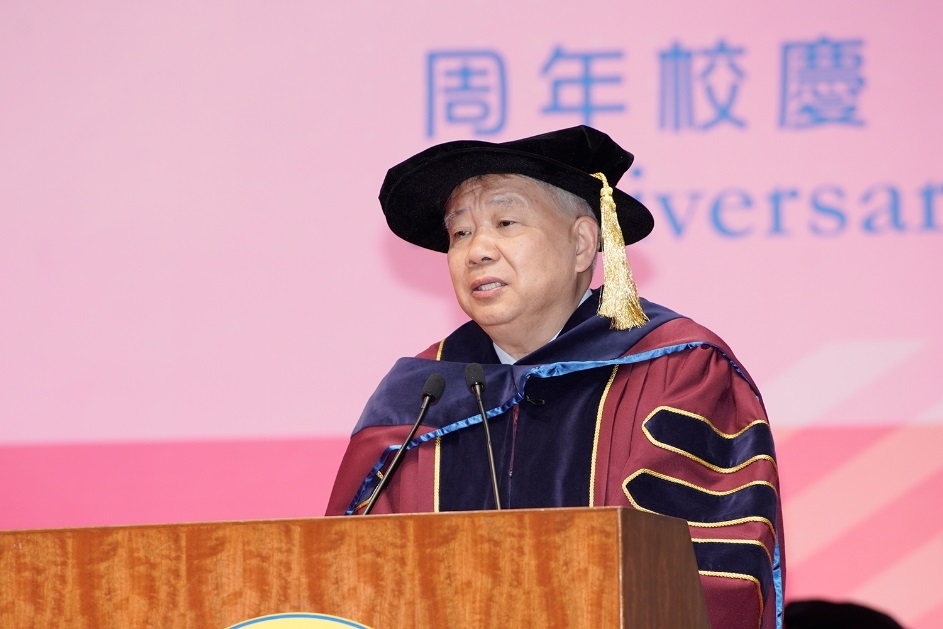 Prof. Ding Jian, Academician of the Chinese Academy of Engineering, spoke as a representative of the honorary doctors

Prof. Ding Jian gave a speech on behalf of the recipients of the honorary doctoral degrees. He marked that being a comprehensive university, Macau University of Science and Technology has placed a high value on developing medicine programs and given full support to the development of the State Key Laboratory of Quality Research in Chinese Medicines, which, in the last decade, has made significant achievements in basic research and applied research of quality control in Chinese medicines. The professor said that in the course of cooperation with M.U.S.T., he’s experienced and felt deeply the openness, cooperativeness, excellence-oriented-ness and tenacity of the university and that it was a great honor for him to become a member of the university, pledging that he would regard it as a new starting point, strengthen and deepen cooperation with the university, and jointly write more beautiful chapters! 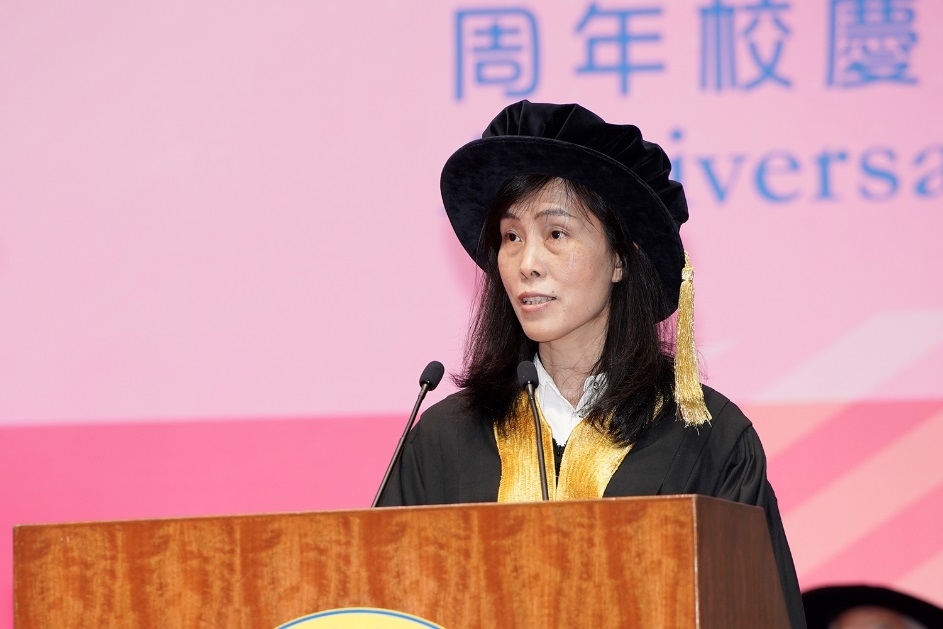 Secretary for Social Affairs and Culture, Ms. Ao Ieong U addressed the ceremony and extended warmest congratulations to the recipients of the honorary doctoral degrees. The secretary acknowledged that as a young university founded after Macao returned to the motherland, M.U.S.T. has been implementing the policy of according equal importance to teaching and research and bringing in outstanding scholars, which has led to significant improvement in its academic standards and continuous rise in its international impact. The Outline Development Plan for the Guangdong-Hong Kong-Macao Greater Bay Area has provided Macao and Macao universities with new opportunities. The Macao S.A.R. Government will continue to enforce its policy of “Prospering Macao through education and developing Macao with talents”, continue to provide greater support to the development of higher education, assist Macao universities including Macau University of Science and Technology to accomplish greater development, optimize the allocation of educational resources, and cultivate a greater diversity of talent forces. 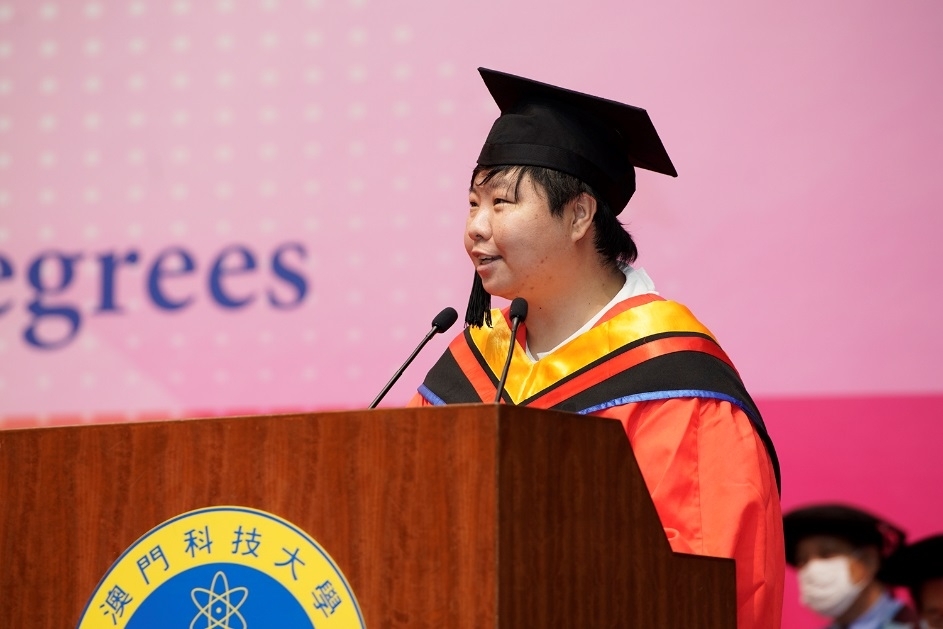 Assistant Prof. Bu Huimei from the School of Business spoke as a teacher representative. She is a real “MUSTer” made in M.U.S.T.; in her 17 years with M.U.S.T., she’s completed her studies for bachelor, master, and doctoral degrees and stayed on as a faculty member. She is a witness to the course of M.U.S.T. from being a new university to joining the ranks of the world’s top universities, a witness to the increasing improvement of the university campus facilities, and a witness to the continuous output of talent by the alma mater to the society and the university’s efforts in integrating the various areas and industries of the mother nation. She encouraged the students to seize the opportunities bestowed on the youth by the country, value the exceptional conditions and milieu afforded by M.U.S.T., continue to explore and seek knowledge, with a sense of responsibility toward the country and the family, with aspirations and with a sense of social commitment. 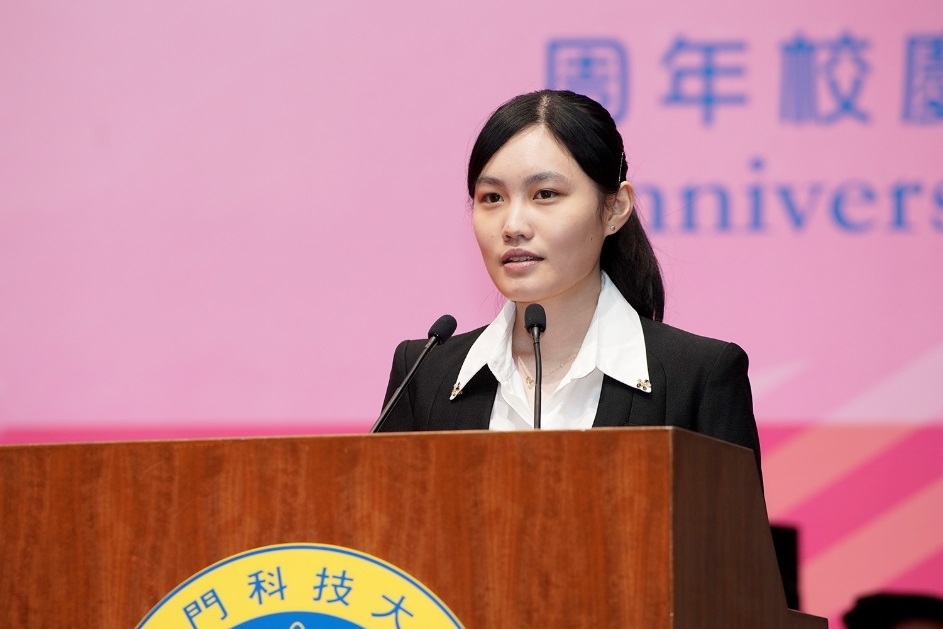 Undergraduate student Guo Jingyan from the Bachelor of Medicine and Bachelor of Surgery program of the Faculty of Medicine spoke at the ceremony as a representative of undergraduate students. She regarded university as a broad stage that is filled with challenges and opportunities, where students not only can pursue professional knowledge but also can achieve a better self-recognition and find life goals. She hopes that in his future university life, she would become someone with ideas, dreams, expertise and humanistic compassions, and she hopes that all the students could get out of their comfort zone, plan their future, set up goals, and take actions and make their university life fulfilling and meaningful. 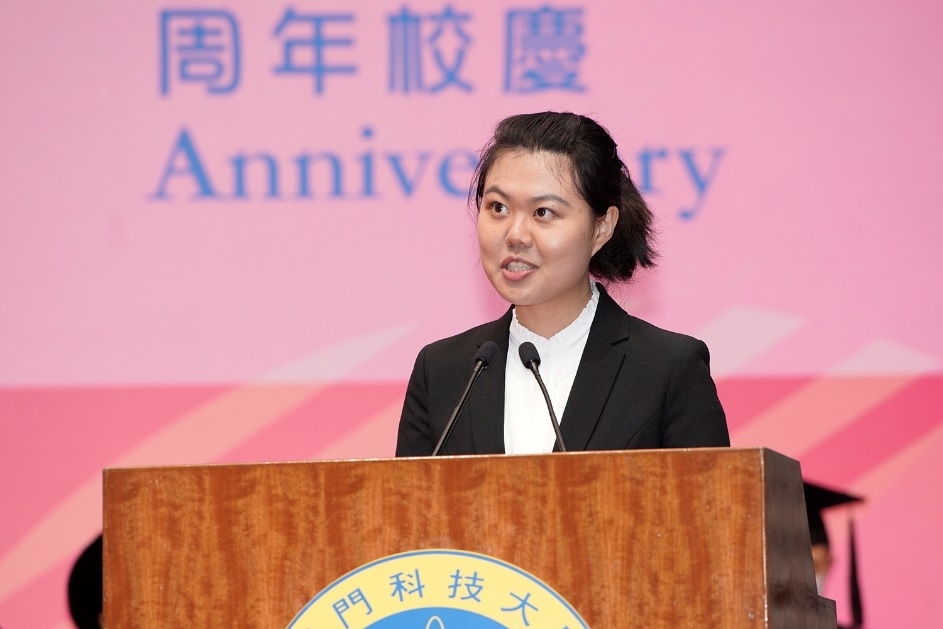 Xia Mengzhen, a student from the PhD Degree in International Relations Program, spoke on behalf of new graduate students

Xia Mengzhen, a new student of the program of PhD Degree in International Relations, the Institute for Social and Cultural Research, spoke on behalf of new graduate students. She said that she felt delighted to be able to live in Macao and at M.U.S.T., and Macao is a beautiful, open, loving city full of love and diverse cultures, while M.U.S.T. is a university filled with vigor and creativity, which upholds academic liberty, rigorous academic milieu, and would help students to reach greater heights. She called on the fellow students to dare to dream, embrace new challenges and create a splendid brand new chapter for their path to greater knowledge.

Prof. Ding Jian Prof. Ding Jian is a renowned Chinese cancer pharmacologist, has made prolific achievements in the research field of anti-cancer drugs, and is a leading pioneer in the Chinese pharmacology community. He led and established an evaluation system for anti-cancer drug screening and pharmacodynamics, which fits international standards and provides important technical support and capacity guarantee for China’s independent research and development of anti-cancer innovative drugs. The new drug candidates against cancer developed by Prof. Ding Jian and his team have constructed a development and research channel for new anti-cancer drugs, which is highly competitive internationally. Prof. Tasuku Honjo is a renowned Japanese immunologist, laureate of Nobel Prize in Physiology or Medicine, 2018. He was the first to identify Programmed cell death protein 1 (PD-1) as an inducible gene on activated T-lymphocytes, which significantly contributed to the establishment of cancer immunotherapy. Professor Frances Ashcroft is a winner of the L'Oréal/UNESCO For Women in Science Award. She discovered that the ATP-sensitive potassium (KATP) channel serves as the molecular link between glucose elevation and insulin secretion. Her work has enabled patients with diabetes to switch from long-time dependence on insulin injections to drug therapy. Ms. Ho Sut Heng is a well-known, highly regarded figure in Macao. She has been President of the Macao Federation of Trade Unions for many years and has made outstanding contributions to the harmony of society and the development of the economy in Macao. She was elected as Member of the Deputies to the 13th National People’s Congress from the Macao Special Administrative Region of the People’s Republic of China in 2017, and was awarded Honorable Medal of Silver Lotus Flower of the Macao S.A.R. in 2019. Prof. Li Lan Juan is a renowned Chinese epidemiologist. As a Chinese pioneer in artificial liver, she created the unique and effective Li-styled artificial liver support system to be used for the treatment of critical hepatitis and liver failures, which has reduced the mortality rate of patients significantly. She was the first to put forward the theory of infectious microecology, the first to uncover fully the patterns of micro-ecological meta-genomic changes in the gastrointestinal tract, and has received many awards including the National Science and Technology Progress Award. Prof. Zhou Li Gao is a renowned educator in Macao. He was President of the University of Macau, President and then Chairman of the University Council of Macau University of Science and Technology, and Member of the Preparatory Committee of the National People’s Congress for the Macao Special Administrative Region. He has made contributions to the historical course of Macao’s return to the Motherland and the development of Macao’s higher education, and to the guarantee of high-quality talents for the successful implementation of One Country, Two Systems and Macao People Govern Macao. In 1999, he was awarded “Macao Government Medal of Professional Merit” by then Macao Governor Vasco Joaquim Rocha Vieira. In 2001, he was awarded the “Certificate of Honor” by then Chief Executive Ho Hau Wah of the Macao S.A.R. The six honorary doctors have made exceptional achievements in and extraordinary contributions to the field of pharmacology research, cancer treatment, diabetes treatment, Macao’s societal development, prevention and control of emerging and major epidemiology, and Macao’s higher education development. They are lifetime role models of the teachers and students of M.U.S.T.

M.U.S.T. Holds Opening Ceremony and Ceremony for the Conferment of Honorary Doctoral Degrees President Liu Liang Calls on Students to Become Man of Determination and Action