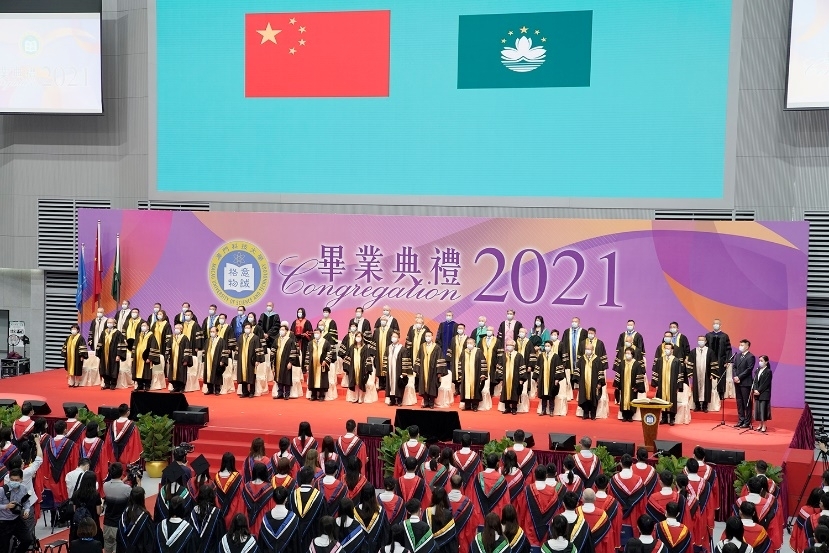 The 2021 Congregation of Macau University of Science and Technology was held successfully in an online-plus-offline fashion at the University’s Block R Academic Complex on the afternoon of June 5, 2021. Ms. Ao Ieong U, representative of the Chief Executive of the Macao S.A.R. Government and Secretary for Social Affairs and Culture of the Macao S.A.R., officiated the ceremony. Other guests attending the ceremony include Mr. Hong Bo, Deputy Minister of the Department of Education and Youth Affairs of the Liaison Office of the Central People’s Government in the Macao S.A.R., Counsellor Wang Chen, Director of the Department of International Organizations & Legal Affairs Office of the Commissioner of the Ministry of Foreign Affairs in the Macao Special Administrative Region of the People’s Republic of China. Mr. Lou Pak Sang, Director of the Education and Youth Development Bureau of Macao S.A.R., Dr. Liu Chak Wan, Chancellor of M.U.S.T., Chairman Chui Sai Cheong of the Board of Trustees of the M.U.S.T. Foundation, Dr. Tong Chi Kin, Chairman of the Advisory Committee of M.U.S.T., members of the M.U.S.T. Foundation, the University Council and the Advisory Board, governmental officials, representatives from major corporations, scholarship patrons, local higher institutions and secondary schools, parents and friends, and faculty members. The graduating class this year is comprised of 3000 students from the university’s faculties and institutes. Given COVID-19, the ceremony was held in strict alliance with the relevant anti-epidemic guidelines and requirements by the Health Bureau and other relevant departments, and on the condition of guarantee of environmental safety. Approximately 500 graduands accompanied by parents and relatives attended the Congregation on-site in person, and in the meantime, the ceremony was broadcasted live to enable all parties of interest to witness the milestone moment of the graduates when they open a new chapter in life. Following the Congregation, each Faculty offered a faculty-based graduation ceremony. In addition, a flag-raising ceremony was held at 9 am on the morning of the same day. 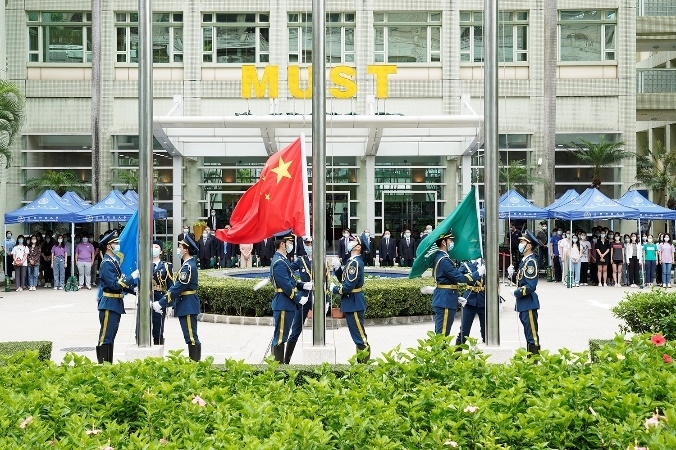 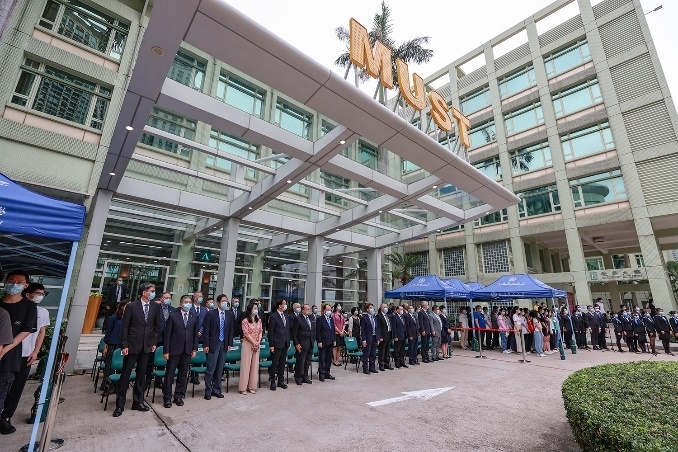 The Congregation opened with the solemn national anthem. President Joseph Hun-wei LEE addressed the ceremony. He noted that being a young university on the move, the University has grown to become arguably the most successful private university in the Cross-Strait, Hong Kong, and Macao regions. It is ranked by the Times Higher Education (THE) among the world’s top 300 in World University Rankings, and the 32nd in Asia University Rankings. The University now owns 2 State Key Laboratories in Quality Research in Chinese Medicines, and Lunar and Planetary Sciences, 5 partner research bases and joint laboratories of the Ministry of Education’s Key Research Institutes in Humanities and Social Sciences, plus a plethora of research centers to conduct strategic inter-disciplinary research in many areas. The university’s applied research has been recognized by over 300 patents. Besides, M.U.S.T. has contributed to the fight against COVID – from developing drugs against Coronavirus infections to the use of artificial intelligence (AI) to detect these infections from computer tomography (CT) scan images. The University has also actively participated in Tianwen-1 China’s first space mission to Mars and designed Macao’s first scientific satellite scheduled to launch next year. The university’s new Strategic Plan will intensify engagement in the development of the GBA and will collaborate with Zhuhai and Zhongshan governments in research and education –to promote technology transfer and industrialization, fostering talent, and boosting internationalization. The president called for the graduating students to remember the core values of M.U.S.T.: quality and innovation, and encouraged the students with his motto – “It is the getting around to do something that frightens you, not the doing it!”, expressing wishes that the students believe in themselves, believe in their values, and believe that they will succeed. 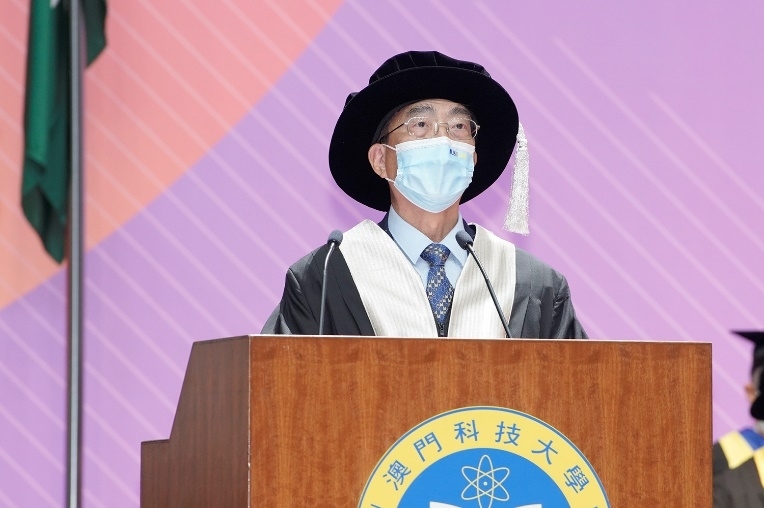 Ms. Ao Ieong U, representative of the Chief Executive of the Macao S.A.R. and Secretary for Social Affairs and Culture, delivered a speech. The secretary noted that over the course of the 21 years since it was founded, Macau University of Science and Technology has committed to its missions, acted closely in line with the needs of development of Macao and the nation, cooperated with the policies and guidelines of the S.A.R. Government, and fostered a large number of outstanding China-loving, Macao-loving talents. Recently, M.U.S.T. has been seeking collaborations proactively with domestic governmental organizations and higher institutions, and growing platforms for education and innovative research, including setting up research bases and joint laboratories of the Ministry of Education’s Key Research Institutes in Humanities and Social Sciences, interdisciplinary research centers, and platforms. This aligns closely with the strategic planning of the national development and the GBA, taking a proactive stance in regional cooperation. The secretary also encouraged the graduating students to equip themselves accordingly and integrate actively into the development of the GBA, work hard, and pursue greater development in personal careers while making contributions for Macao and national development. 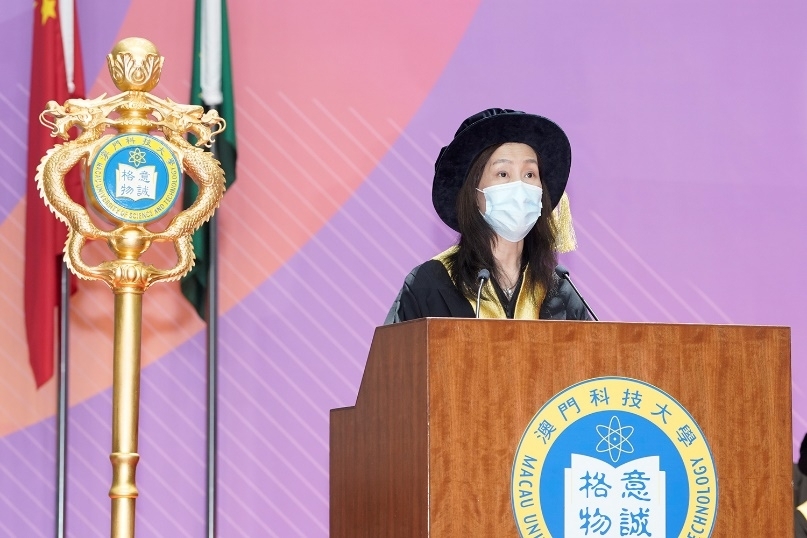 Luo Jingjing, graduating doctoral student of Faculty of Hospitality and Tourism Management, and Zhang Yaoqian, graduating undergraduate of the Chinese Medicine major of Faculty of Chinese Medicines spoke on behalf of the graduating class. They shared that M.U.S.T. is a place where indefinite possibilities are created, where students can grow academically, and feel assured of themselves. The University has been working to create an extraordinary environment of learning and research for students. While studying here, they have made continuous progress, explored their own self, and enriched their life. They cited the M.U.S.T. motto, “Dedication to practical studies, Enhancement of knowledge, Ability and Quality”, to encourage all the graduating students to act on the university motto and pursue studies with sincerity and integrity as “Studies of things result in enhancement of knowledge, while enhanced knowledge results in sincerity and integrity”. 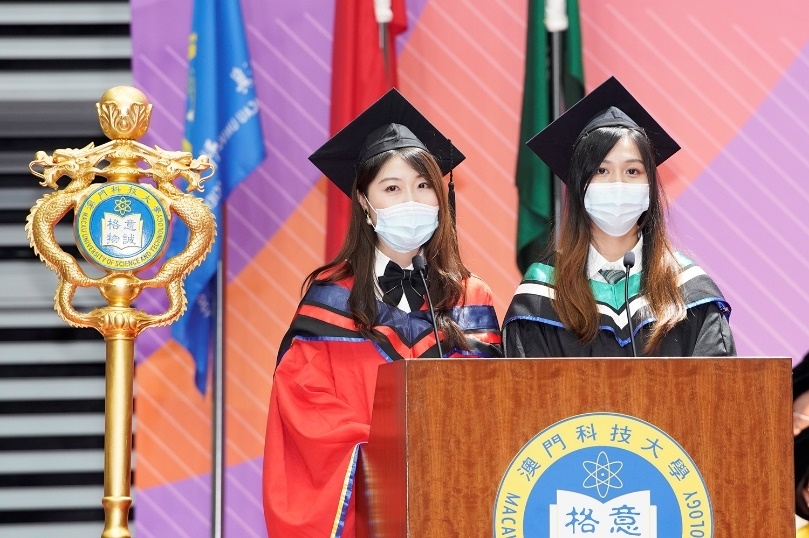 Student representatives spoke at the Congregation